More about the front end 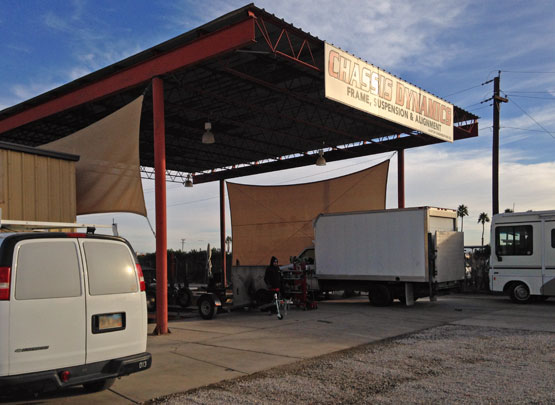 I posted before about the steering repairs my friend Forrest did for me. I knew several parts were worn, with the Pitman and idler arms being the worst. Installing new ones helped a lot, but there were still some thunks and wobbles. In any case, I'd need the front end aligned.

I googled alignment shops in Yuma. Chassis Dynamics is a family-owned shop with excellent reviews. They offered suspension inspections for a fairly reasonable price, so I could have them check things out to see what else needed replacement. I booked an appointment via their online form.

The place has the look of serious, no-frills shop—the kind locals have been depending upon for generations. The vehicles being worked on included cars, commercial trucks, one of the school district's buses, and RVs.

There was a hiccup, however. The guy behind the desk apologized profusely that their online reservation system was buggy and essentially useless. He muttered a few things about the IT guy they were using and said he needed to add a message to their appointment confirmation email telling customers to reconfirm by phone. He said he could fit me in first thing the next day and that he'd give me half off the inspection. "Sure, I can do that," I replied. He wrote it in his calendar book, old school. So I was there when the gate opened this morning and they were true to their word. The guy at the counter even remembered me by name.

I thought about what the inspection might reveal. The inner and outer tie rod ends were probably as shot as the Pitman and idler arms had been, and if I'd been thinking I would've had those parts for when Forrest did the other work. They're easy to replace. In fact, I could probably do it myself. Then there was a chance the ball joints were also worn. That would be beyond my capabilities, and Forrest probably wouldn't have the specialized tools with him to do the job. But it's not that big of a deal at an actual shop (as opposed to the middle of the desert). But the one I feared most was worn out control arm bushings, because replacement is labor-intensive. I read a magazine (gotta love a place that has Rolling Stone) and waited.

The guy returned with the report. The news was... good. The ball joints and control arm bushings were fine. Only the tie rods needed replacement. He said he was kind of clogged with paperwork but he'd call later with an estimate. I'm curious what they would charge, even though I'll probably do it myself.

I've been trying to remember when I first became aware of the front end clunking and wobbling. I can't pinpoint it because it happened gradually. That's the nature of mechanical wear. But a problem creeping up on you is better than it announcing itself by swerving you off a cliff or into the path of a semi. So pay attention to the sounds, vibrations and whatnot your vehicle makes and the way it behaves. Be aware of any changes. It's a sign.