A few months back Lou asked if I wanted a package of dehydrated hash browns. I hadn’t known there was such a thing. So yeah.

Just soak them a few minutes, blot them dry, then fry ‘em up, add salt and pepper and whatever else. Really good.

So I bought some more, and enjoyed them, too.

I tried making some from scratch. They were a disaster.

I looked for them online. I could get them by the case. Nah. Or as a grossly overpriced two-pack. Double nah.

I thought maybe they just weren’t popular enough in the greater Silver City market for the stores to stock them. So I continued my quest when I hit the road. I didn’t find them in Tucson, Buckeye, Blythe or Indio. I didn’t find them at two Fry’s in Yuma or in two of the three-and-a-half Walmarts. Maybe they had stopped making them.

But then today, when I wasn’t really looking for them, because I didn’t think I’d ever see them again, there they were, in the third Yuma Walmart. (Sort of like those stories of finding love when you stop chasing after it.) I grabbed enough to hold me for a while. (Dehydrated hash browns, not love.) 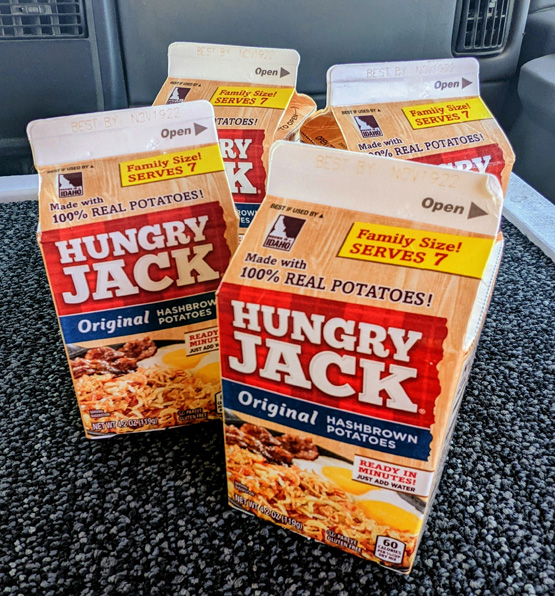