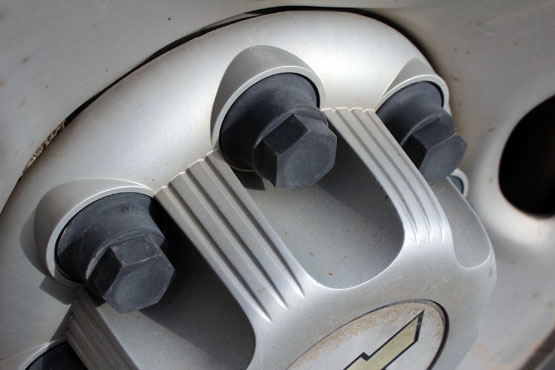 Chevrolet and GMC trucks have hubcaps held on by fake nuts. The plastic gets more brittle over time, and some tire jockeys go overboard tightening them, causing them to strip or split. Then road vibrations cause them to loosen. It’s not a great design, but I like the looks of the hubcaps better than none at all.

So rather than having to keep snugging up the fake bolts, I got wondering about some type of sticky stuff I could apply to hold them on but not make them impossible to remove. Something permanently temporary. Thread locker? Silicone? Ear wax?

Lou suggested plumber’s putty. And he had some on hand. It was worth a try. I smeared blobs on the actual lug nuts, installed the hubcaps and…

It has worked so far. After about a thousand miles, some of it on lumpy and washboarded roads, the fake nuts are still snug.