In one town I lived in, it was common on rainy days (or when people forgot to turn off their sprinklers) for the worm population to avoid drowning by crawling out of lawns and gardens and onto the nearest pavement. I guess there weren’t enough hungry birds to gobble up all the worms, so hundreds, maybe thousands, of the crawlers covered the sidewalks. If you wanted to walk anywhere during those times you either had to find ways around the worms or just step on them.

I had a girlfriend in those days who would refuse to go out when there were worms on the sidewalks. It wasn’t that she worried about squashing them. Worms just gave her the creeps. Simply saying worms made her skin crawl, which I guess is appropriate since worms are essentially crawling skin.

Some of the worms would fail to make their way back underground before the sun came out and turned them into jerky. I’m fairly certain that’s not how my latest food experiment was made. 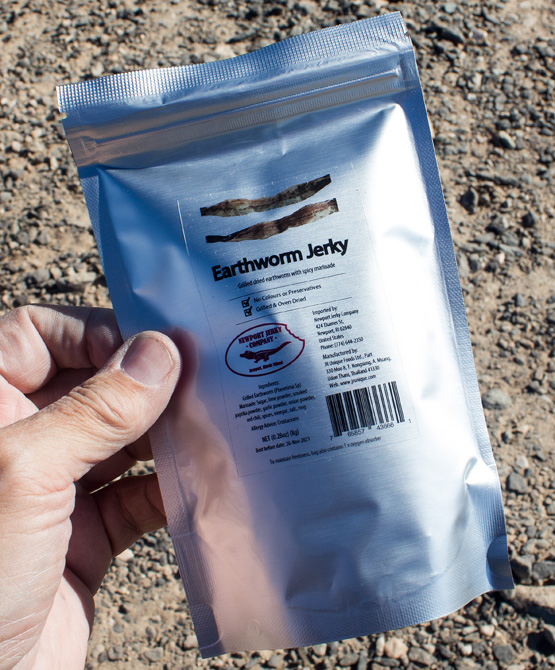 Earthworm jerky from the Newport Jerky Company is grilled earthworms marinated in sugar, lime powder, smoked paprika, garlic powder, onion powder, red chili, vinegar, salt and MSG. What’s not to love? You could probably marinate a skunk’s scent gland in that mixture and it would be yummy. 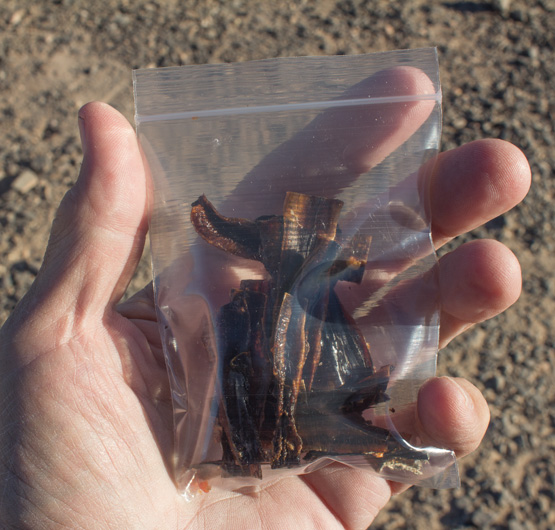 I was disappointed by the small amount of jerked worms in the package, but not by their taste. Very nice. I imagine the company’s other jerky products (which include alligator, octopus and shark) taste pretty much the same. Jerky is jerky. Some varieties just come with mental baggage.

As for texture, or what the food industry calls mouth feel, worm jerky starts out something like a slip of marinated and dried paper but becomes surprisingly chewy.

For the sake of the planet, we protein craving carnivores need to find alternatives to beef, pork, chicken and fish. (Insert vegan proselytizing here.) Worms—at least in jerky form—are ridiculously expensive for anything but some oooh-look-I’m-eating-worms entertainment value. (Hundreds of dollars per pound. Plus shipping. And you thought waygu beef was spendy.) But scaled up production would bring prices way down. Better yet, you can have a your own vermiculture operation in just a box of dirt. With maybe a little sidewalk in there for the times you overwater.