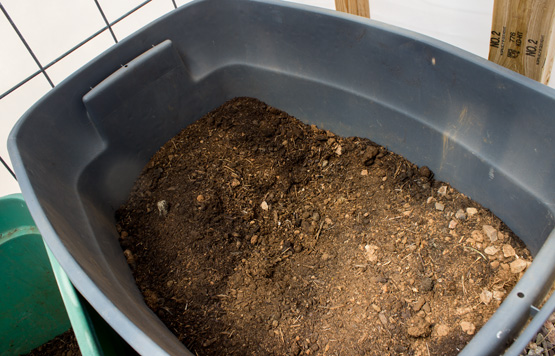 Earlier he had acquired some strawberries and chives at the nursery in town. He was ready to put his greenhouse back in operation.

As we walked to the patio I thought about a broader, more universal meaning of, “I need help carrying a tub of dirt.”

We all have burdens. And sometimes those burdens don’t seem to amount to anything more than a pile of dirt—particularly to outside observers. But it’s our dirt, we need to carry it, and sometimes it’s more than we can handle alone.

There were actually two tubs of dirt. We carried the smaller one to the greenhouse first. Gotta warm up one’s muscles before tackling the bigger job. The second tub was, oof, much heavier.

“This was collected from my composting toilet.”

We were literally dealing with his shit.

But it was shit that would be put to a good purpose. It’s shit that will enable growth. And strawberries.