These are the people I hate

The public land on the east side of Pahrump NV is littered with, well, litter. It can be windy here, so it’s somewhat forgivable when some lightweight something-or-other—a plastic bag, an empty water bottle, a paper towel, etc.—slips away and ends up stuck in a creosote bush a quarter mile away. Some litter blows in from the developed parts of town, where it seems trash cans and dumpsters have no lids. But some of the crap is just flagrantly dumped here. Like this: 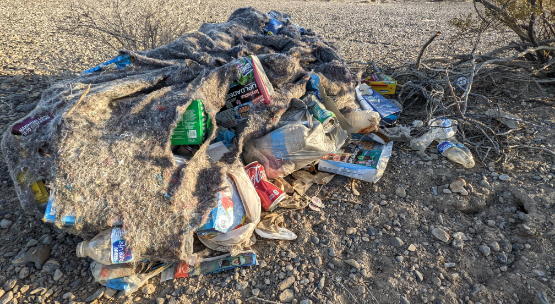 I discovered it while gathering trash around my campsite. I don’t know what this pile was wrapped in originally (a blanket?) but the sun and heat have turned it into something that looks like dryer lint. Picking this up would require more resources than I have, starting with a backhoe and hazmat suit.