A rolling stone gathers no air 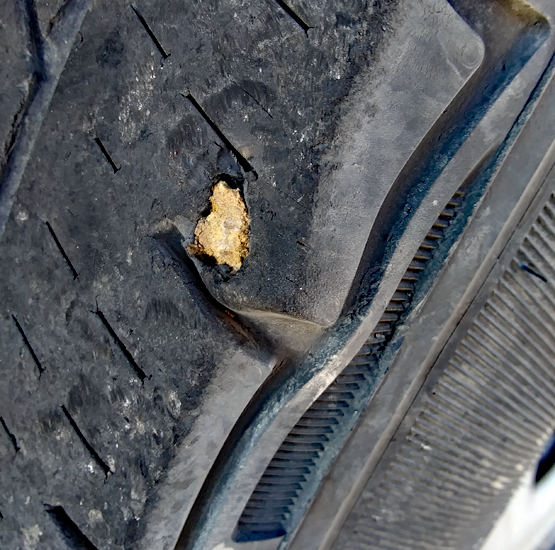 A pointy bit of rock managed to find its way into my front passenger-side tire. Hurray for driving in the desert. I discovered it while there was still air in the tire, before I could destroy the sidewall by driving on it.

Okay, despite it being a pain in the ass, I decided to change the tire. I’ve done it before. But if you’ve been following me a few years, and if you have a decent memory for things that don’t directly concern you, or you’ve had to change a tire on a GM pickup or van, you might recall there’s a common problem getting the spare tire from under the truck.

Then there’s the issue of trying to work on rocky ground. And the issue of me being kind of weak after cancer. I fussed with it a while, discovered my WD-40 didn’t want to spray (despite being partially full) and I started feeling exhausted. I thought it might be wiser to stop before I hurt myself.

Plan B was to try some Fix-A-Flat. There was a truck stop a couple of miles away. I got out my electric pump and reinflated the tire to the proper 50 PSI. I checked it again about a mile later. It was down to 25 PSI. I pumped it up some more.

I got some Fix-A-Flat, followed the directions and pumped it up again. By the time I got back to camp, Fix-A-Flat was bubbling out around the puncture. Rats. I checked on it after a while and the pressure was back down to 25 PSI. The Fix-A-Flat wasn’t bubbling out anymore when I added air, but I could feel a bit of air coming out. The goo didn’t do the job.

And, of course, this happened on a Sunday, when the local tire shops are closed. So I’ll keep reinflating the tire until Monday morning, even if that means getting up to run the pump in the middle of the night. Then I’ll limp to a tire shop to get the spare freed up and installed. Since selection of tires is low and the prices high here in Quartzsite and neighboring towns, I’ll make a run to Yuma for a new tire. Or two, considering the other front tire has also been patched.