I hadn’t planned on tilting my solar panel back when I first mounted it to the Rolling Steel Tent. After a winter of less daylight I decided tilting was a good idea.

Since the cables went through a hole on the passenger side of the roof, I hinged things so I would raise the driver side. But that meant I had to use my trusty folding chair in order to reach high enough to tilt the panel and affix the support struts. Not a big deal, just a small annoyance.

After living with it like that or a few years I decided to change things around and tilt the panel the other way so I could simply stand in the rear and side doorways to erect the panel. The trouble was, the cable length now limited how far I could raise the panel. But… eh… it was good enough.

Now that I had new batteries it seemed like a good time to do something about my limited tilting ability.

“Hey, Lou, do you happen to have some extra solar cabling and MC4 connectors?”

“Of course.” I figured he would, because he has wired and rewired several systems several times. And he never throws out anything that might be useful someday.

So this morning we added about a foot to the length of my solar panel cables. More than enough. And to keep the extra cable from slapping on the roof when I drive, we zip tied a bit of pool noodle around it. 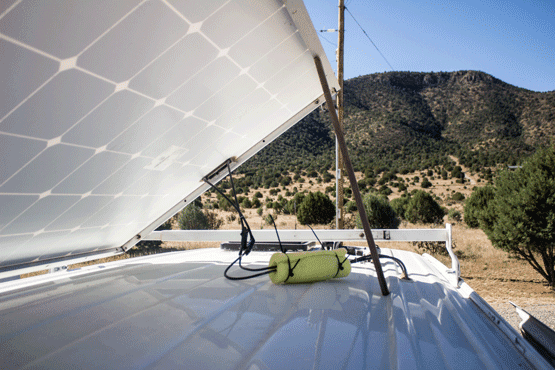