It all started with Lou being dissatisfied with the free phone he got with his Visible account. After careful shopping he ordered a better one.

I had been skeptical of Visible ever since I’d heard of it. Unlimited data, with no throttling, for as little as $25 a month? Lou assured me that was true. Hmmmm… It got me rethinking my mobile communications setup.

The past year my mobile stuff has looked like this:

I had been with Verizon for a few years, mostly because of the availability of their signal out in the boonies. I had a phone and a hot spot, both with unlimited data, but both throttled after 22GB. So two devices allowed twice as much data use before throttling.

When my phone was paid off I thought about the trouble I had getting a Verizon signal in some places (like a friend’s place near Taos and at Lou’s place). Maybe I should get a phone from a different carrier so I’d have two options.

Just then, as if specifically to answer my question, the newly-merged T-Mobile and Sprint introduced a hot spot plan with 100GB of data per month. Ah-ha. I could dump the phone from Verizon, get a cheap prepaid phone for actual phoning, add the T-Mobile hot spot, and be paying less each month. So that’s what I did. I sold my iPhone and got a $40 LG phone from StraightTalk, with 5GB of data.

With Lou convincing me Visible was a solid choice, I got thinking some more. I could get unlimited data with Visible (which is a subsidiary of Verizon and uses their signal) with one of their phones and end up with Verizon and T-Mobile. And I could let go of the Verizon hot spot and shut down that account. Then my setup would look like this, and cost a lot less:

I did some careful shopping of my own. I compared the various phones Visible was offering, looking for that just right Goldilocks solution—something toward the low price end of the scale, but still capable—and not too huge. The Google Pixel 4a 5G fit the bill.

But before I finally made up my mind, the Pixel 6 was released, and Visible stopped offering the 4a. Well damn.

Ah, but I could bring my own phone. I found a lightly used Pixel 4a 5G for a reasonable price, from a well-reviewed vendor, on eBay. It arrived, looking good and functioning well.

I ran the IMEI number through Visible’s compatibility checker and… Not compatible. What? I entered the number again. Still not compatible. I got on a chat with Visible’s notoriously bad customer support. “Yeah, we stopped supporting the Pixel 5 and 4 when the 6 came out. Sorry.” Well damn again.

My options would be to resell the Pixel 4a and get a phone Visible still supported, or add the Pixel to my Verizon account. Ummmmm…

I decided to go with the easier but less economical second choice. I fed the Pixel’s code number into the Verizon compatibility checker and got an okay. Then I went to the Verizon store in Silver City where William helped me out.

Transferring a phone number from one carrier to another is usually a simple thing. Usually. Looking at his screen, William said, “It says here it might be up to 48 hours before the phone can be activated, but it should take way less than that.”

Forty hours later, with the phone still refusing to activate, I returned to William. He checked his computer, made a calls to both Straight Talk and Verizon, got transferred and put on hold several times (all while trying to handle other customers in the shop) and finally learned Straight Talk had an incorrect ZIP Code on the account. With that fixed, and the number released to Verizon, we should be able to activate the phone within three hours.

That didn’t happen, so back to William the next day. More calls, more time on hold, more lack of answers, more having calls dropped, more recalling, more transfers to more people who didn’t have a clue, more customers to handle in the store… And through it all, William remained determined. All too often, people in his position would’ve just told me within the first few minutes something like, “Well, sorry, but we don’t know. Guess you’re screwed.” But William kept plugging along, being assertive with the people on the other end of the line. “As far as we can tell,” he told me, “Straight Talk released the number to Verizon and it fell into a crack somewhere in the system. I’ve got my manager and the regional manager working on it at their level. Thank you for your patience.”

At this point I was willing to just get a new number, but William said he didn’t think that was possible without opening another can of worms, since things had already been entered into my account. We both sighed. I thanked him for his dedication and determination and went to get some lunch. (Carne asada burrito from Fidencio’s)

Shortly after I returned, the manager stepped from her office, giving me a thumbs up. She fiddled with my phone as she approached. William’s phone rang. She confirmed the number. We were activated! Hallelujah! Finally! I thanked William again for his great attitude and said to his boss, “He deserves a raise. Hell, he deserves a part of the business!” 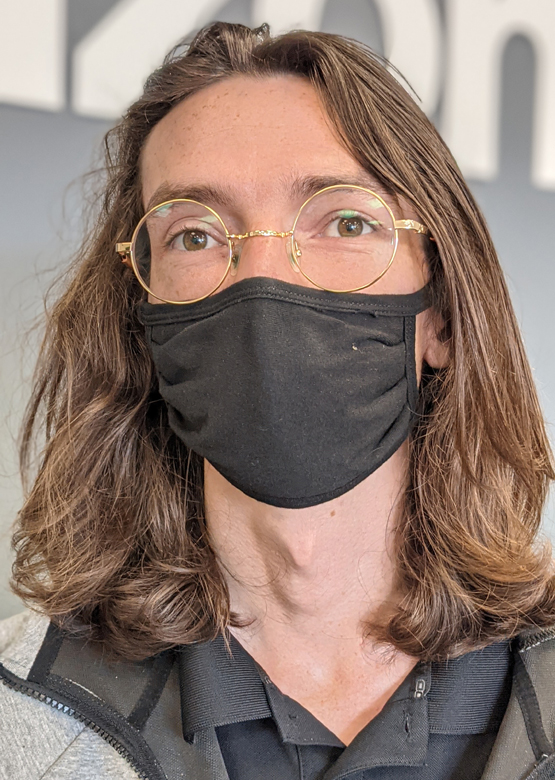 Two thumbs up for William

In small towns it’s hard to find anyone to fill jobs, much less competent and dedicated ones who are good with customers. So despite all the trouble, I lucked out.

So, I’ve ended up not saving as much as originally planned, but I have a more livable communications system. And a story to tell.