Listen to the warnings

I was headed east, back to the desert on I-10 (or, as Southern Californians call it, the 10). The weather was great and I was driving with the window open. And traffic was cruising along.

Some road construction and a closed lane put me next to the barrier wall to my left. A combination of my tire tread pattern and the rain grooves in the pavement created an eerie hum-whistle-wail-howl that changed pitch with the direction of the grooves and echoed off the barrier. It was like a cross between banshees, howler monkeys and Yoko Ono.

Traffic spread out after the construction zone. The lane ahead of me was clear for about a quarter mile. There was a semi in the lane to my right and about three lengths ahead. And traffic was zipping past on my left.

Suddenly the semi moved into my lane. Why? There was no traffic in front of him. Then he swerved back into the right lane. That’s when I saw the reason for his maneuver. There was what looked like the plastic grill from some vehicle sliding across the highway. Just then, air turbulence from the semi lifted the grill from the road, about hood high, right in front of me! I couldn’t dodge right because the semi was now next to me, and there was close traffic to the left. So…

The grill skidded up the hood, nearly ripped off the wipers, slammed into the windshield, hit either the roof vent or front edge of the rack or both and…!

I don’t know what happened to the flying body part after that. I was too stunned to check behind me and too concerned about the fate of my windshield.

There were dark streaks on the glass, but none of the existing rock chips had expanded. Nothing was broken. But were those streaks also scratches? Was it time for another windshield replacement?

When I finally stopped to check things out (half expecting to see the grill caught in my roof rack) I saw there were also black streaks on the hood. They and the streaks on the windshield wiped off. The only new damage was a crack in the bug deflector. Okay, nothing serious. 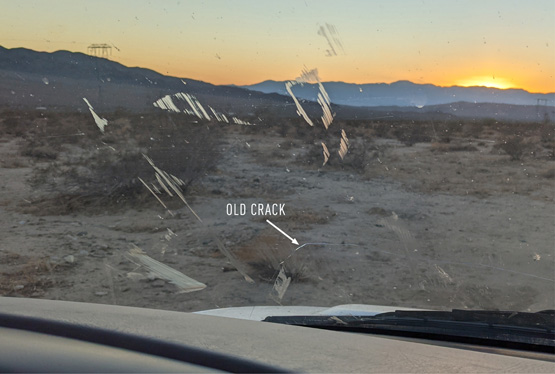 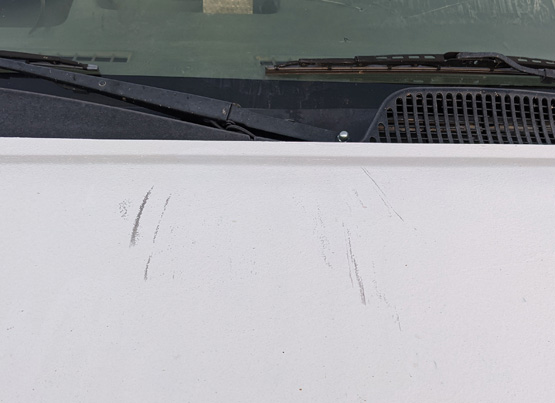 Thinking back, maybe the creepy noise just before the mishap was supposed to be an omen. Monkey screeches... flying monkeys... flying body parts...?

Anyway, my friends, periodically check that your vehicle parts are well attached.