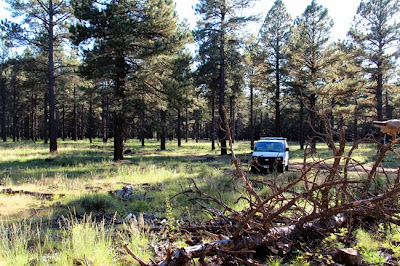 I’m in an undisclosed location in the general vicinity of Flagstaff. I’m not being more specific because the Forest Service has reinterpreted its rules about dispersed camping.

Previously, the rule was that anyone could camp on public land as long as they didn’t stay in one place more than 14 days. (And obeyed all the general rules of responsible camping.)

Now, they’ve decided there’s a difference between camping and living—even though those living on public land are doing exactly the same things as those who are camping. The difference, in the eyes of the Forest Service, is that campers have a house or apartment they eventually go back to. Those of us who who don’t have a conventional, immovable dwelling somewhere, connected to utilities and all that, are considered, eeeew, homeless.

The guy I’m currently sharing the undisclosed location with has a blog about living full time in vans, RVs and the like—whether on public land or elsewhere. He used to put the locations of his campsites on his blog so that others could drop by. The rangers recently chased him out of a site in a Nation Forest. He believes they got his location from his blog and wanted to make an example of him. Now he only gives out his location via email. That’s how I came to be here.

Is it that they’re afraid public lands will become overrun with houseless people? Would they react the same way if long-term camping suddenly became popular among homeowners? Do they think houseless people are less responsible campers, that we’d mess up public lands more than, say, off-road vehicle enthusiasts? Are we more likely to litter and start wildfires than a weekender?

Or is it just that houselessness (as I prefer to call it) has a negative stigma? Vagabonds? Bums? Hobos? Riffraff? Most people shy away from poor people as if poverty is contagious. Gotta chase them away, because they’re...different. Different is bad, right?