This entry is out of chronological order

Let's backtrack a few hours. Elephant Butte Lake is next to Truth or Consequences. Truth or Consequences was originally named Hot Springs. Because, surprise, there are hot mineral springs there. It was an accurate name but rather generic for places with hot springs. Nothing to set it apart. Nothing memorable. No pizazz.

Maybe the city officials were aware of that when, in 1950, the Truth or Consequences radio quiz show (which later moved to TV) said it would air a program from the first city to rename itself after the show. Hot Springs took the plunge (nyuk-nyuk).

Being a hot springs fan, I had to try one of the establishments. A few of them have been modernized and moved upscale. But some haven't seen major renovation since the Sixties. They're the old style motor courts, funky but functional. I chose one of those. Besides, it was cheap. 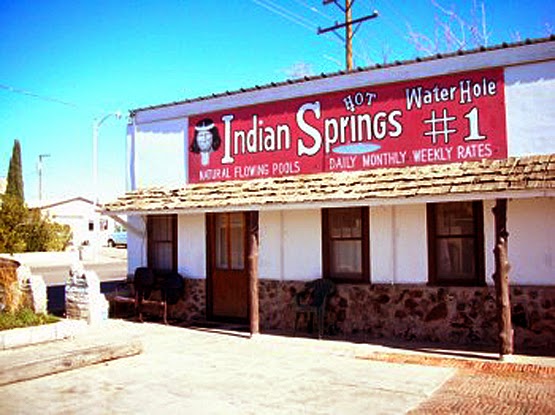 As I got out of the Rolling Steel Tent, a farmer-looking guy about my age came out of the office and, without preliminaries, said, "Half hour, four dollars. Unless you need a towel." I had my own, thanks.

Latching the "Occupied" gate behind me, I went down a few steps and through a door into the bath. It was a very Seventies brick, wood and concrete chamber lit by a skylight. Plenty of hooks for clothing and towels, a bench for changing or hanging out. Three irregularly spaced steps/seats took me down into four foot deep, 6' x 10', gravel bottom pool. You could easily fit six or seven friendly adults in there, and I had it all to myself. 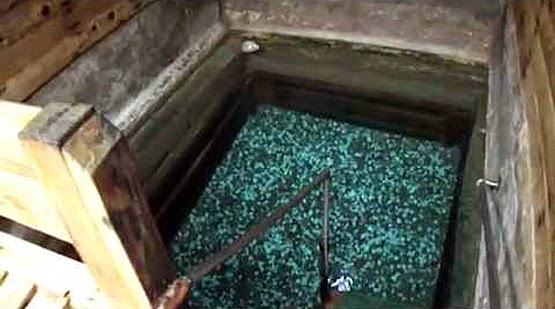 The water was not as hot as I'd hoped. But I found a spot by the water inlet that was more to my liking.

Except for a little gurgling at the drain pipe and the occasional vehicle passing outside, it was very quite and relaxing. I'm so glad there was no New Age meditation music. The only thing better would have been a massage afterward. And a nap. Instead, I hit the road.

The first week in May is the annual celebration of the whole Truth or Consequences name change thing. The event is called Fiesta and features a parade, beauty contest, food and such. I might come back. Another soak is always a good thing.