Putting all that aside

I know you might be surprised to learn I'm not perfect. I have biases against big RVs. Mostly because I'm a bit of a jerk.

I curse at big RVs on the road. I occasionally give them the finger. However, I have never (yet) put sugar in their gas tanks or set one on fire. So my hatred has limits.

I've avoided camping near them, though. It's a mutually beneficial arrangement. I don't have to listen to their generators and they don't have to be offended by the sight of my low-budget home.

But I'm not 100 percent biased or 100 percent jerk. And I'm not always biased and a jerk at the same time. So once in a while I'll gladly van dwell among the folks who would exclude me from their private RV parks. This week is one of those times.

We're at Heron Lake State Park, near Los Ojos/Tierra Amarilla/Chama, New Mexico. We checked out several of the park's campgrounds and ended up preferring a couple of sites in a campground intended for big RVs. It's off-season, so there were plenty of sites available. And few neighbors.

There are electrical and water hookups (which we don't need) and the sites are roomy (to make room for big RVs). The sites are also further apart, with more vegetation between them. Because big RVs deserve that and the peons don't. There are some pull-through sites open, which makes things very easy for Lesa and her trailer (even though she knows how to back in.) Lesa's site even has a shelter and concrete patio. 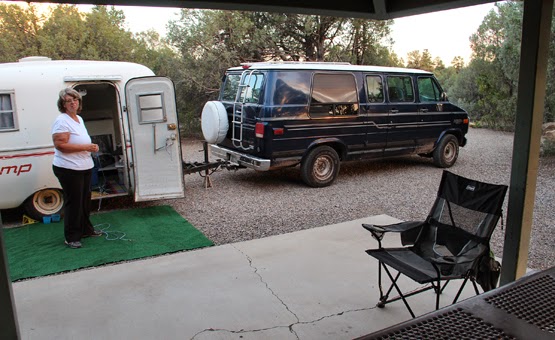 My back-in site across the way is more humble, but spacious enough for four vans. Or a 36-foot fifth-wheel trailer with slide-outs, a heavy-duty dually diesel pickup to haul it, a boat and a pair of OHVs. 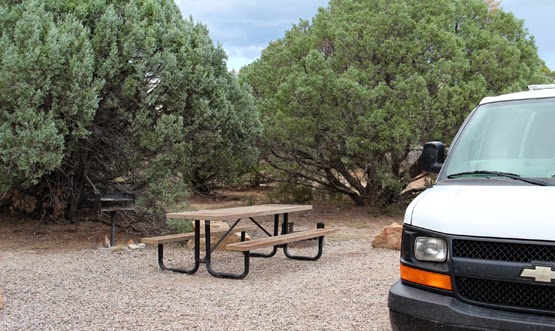 However, there's no view of the lake. That's just as well, since the water level is down about 75 percent. "Oh, look, extra shore!"

We'll spend a few days here. It's nice. It has me mellowed out enough to not want to slash RV tires.