Wherein we blow this joint

Sometimes things conspire against us nomads and we end up stuck somewhere much longer than we wanted. Even nice places can turn tiring.

Such was the case with my friend, Lesa. Cottonwood, Arizona, had had many things to offer her, including medical help. But four months there were more than enough. She was aching to move on. I spent the past week doing what I could to help her wrap things up. The major item was getting her previously-owned Scamp travel trailer roadworthy. 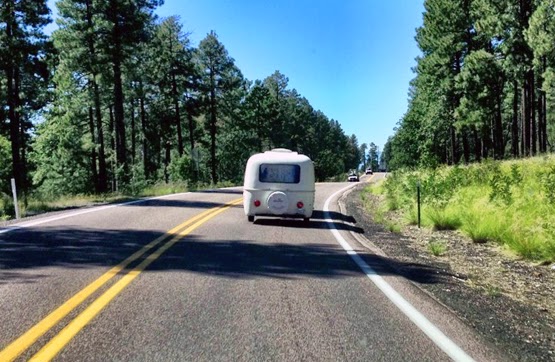 Out of the desert, up into the forest and cooler temperatures

Today was the maiden voyage. East through Payson and up onto the Mogollon Rim. We're making our way to New Mexico. I followed behind to keep an eye on the trailer. Nothing fell off. Nothing caught fire. Success. (Except for the briefly getting lost part.) Lesa is the towing queen.