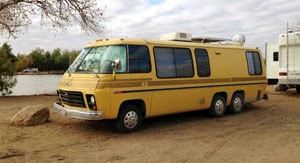 Donna and Mark arrived yesterday in the Yellow Submarine/Weinermobile. We talked of "old" times as we celebrated Lou's birthday with salad and cheesecake.

Conversation eventually led to the story of the jigsaw puzzle that kept us occupied during the long drizzly nights in Quartzsite after Thanksgiving in 2013. Several of us would gather under Donna and Mark's awning, with wet feet and inadequate light, to work on the puzzle. It kept us busy for more than a week.

At one point we became convinced there were pieces from other puzzles in the mix. But we eventually found their proper places, feeling stupid.

There were several empty spots that frustrated us. "I know exactly what goes right here, but I can't find the piece. Aaaargh!"

In the end, the last couple of dozen pieces fell quickly into place, mostly because there weren't many places left for them to go. Ta-dah! Finished! 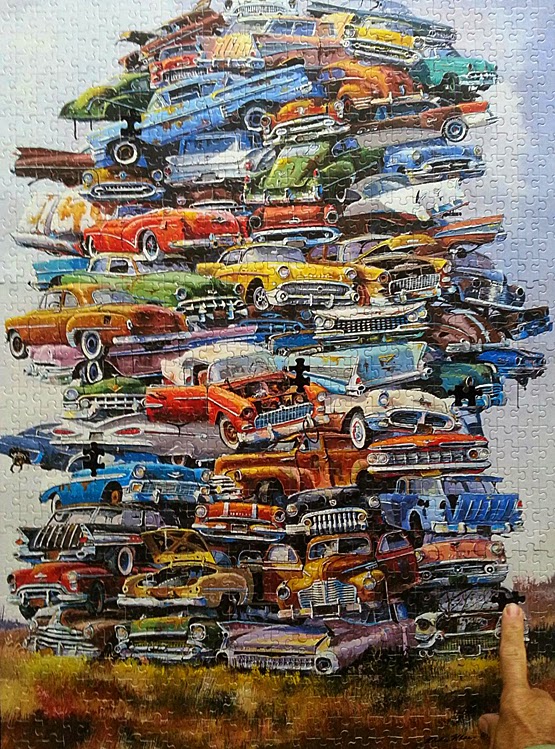 Mark kept searching the photos on his phone while we talked about the puzzle.
He eventually found a photo he'd taken of it. Can you see the empty spots?

But wait. There are still holes. We didn't have extra pieces. We were short five.

We searched the dirt and mud around the table. No luck. Oh well. We'd had fun anyway. And we'd found something to do on those long nights besides crawling into our vans and going to bed. At 5:30.