Meanwhile, in the Rolling Steel Tent...

Lou isn't the only one doing renovations. Mine are mostly cosmetic. Among other things, I'm replacing the ceiling paneling.

Everything was fine for a while. But then the cycling temperatures and shifts in humidity warped the panels a little, making it so the joints didn't flush up to each other. It was still functional, but unattractive. Whenever I was on the bed, I'd see those warps and get more annoyed. Now that I have Lou as a second set of hands, and the use of his power tools, I'm going to replace the ceiling.

In order to access the screws on one side, I had to remove the five mailboxes I use for storage. To remove the mailboxes, I had to empty them of socks, underwear, medications and figure someplace else to put that stuff. And I needed to borrow a small socket from Lou. (I'd gotten rid of just a little too many tools when I hit the road.) 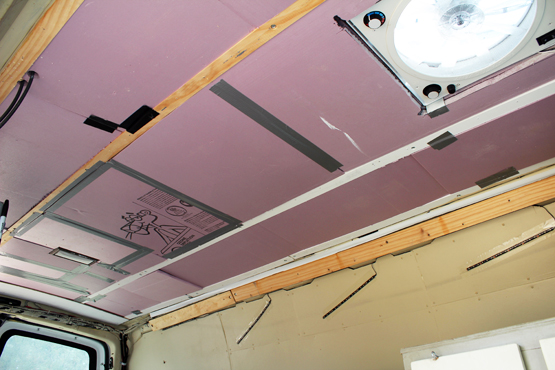 So here's what it looks like stripped of ceiling panels. Ah, the memories of installing the insulation in the dripping heat and humidity of South Carolina. And I'm glad to see there were no leaks or mold hiding up there.