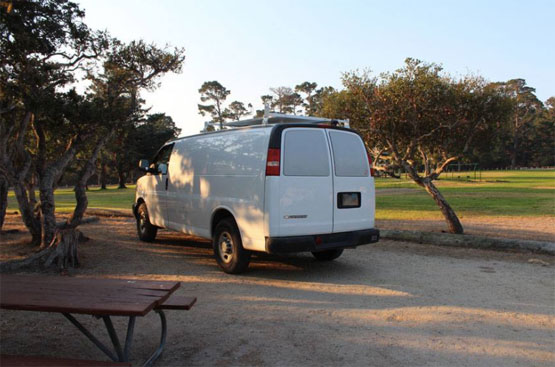 Sometimes urban stealthing (or even semi-stealthing with an officer's permission) gets tiring. I can be vigilant only so long before I just want to be 100% legal and carefree, with bathrooms and a shower, even if that means spending some bucks.

That's why I'm at the campground in Veterans Memorial Park, up on a hill in Monterey CA. It's pricey, but still less than state parks or commercial RV parks.

This morning there was a small group camped a couple of sites over. The men were standing and sitting around while a woman, still in her bathrobe, cooked breakfast. I imagine this evening the men will be doing the grilling. Because one must observe traditional gender roles. Pancakes: women's work. Meat: men's work.