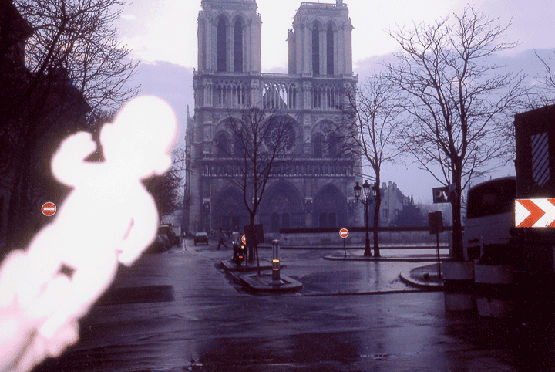 Back in December 1985 the airline People Express launched non-stop service between San Francisco (where I lived at the time) and Brussels with a special $99 fare. A group of friends decided it was too good of a deal to pass up. From Brussels we’d take the train to Paris.

The rubber doll in the photo was a running gag in my office. We called it Baby (Always pronounced in a mock adoring, drawn out Baaay-beeee.) It would get slipped into briefcases, hidden in the freezer, stuffed into the copier paper tray…

I took it with me and photographed it at various sites, trying to do something other than the usual tourist pictures.

I’ve seen Notre Dame live, up close and personal a couple of times. The fire makes me sad, as does the destruction of anything of beauty, including humans.