No longer a clunker

If you’ve been following the story of clunking noises from the Rolling Steel Tent’s front suspension, you might remember the replacement of the pitman and idler arms and the recent replacement of the tie rod ends. Those two fixes reduced the noise a little, but I still felt like my steering components might fly off at any moment.

I had gotten to the point where I was willing to have all the remaining front suspension parts replaced. I had money saved up. So I was ready for a worst-case situation when I went to Hilltop Service in Silver City.

The owner and two mechanics put it on the rack and started wiggling and prying in various diagnostic ways. They seemed perplexed. Then one of them shook the anti-sway bar. Rattle rattle rattle. It wasn’t supposed to make that noise. The four of us said simultaneously, “Worn bushings.”

I thought I would need to come back after the new bushings arrived. The owner asked, “Want me to replace these?”

“Yeah.” He happened to have the needed parts. 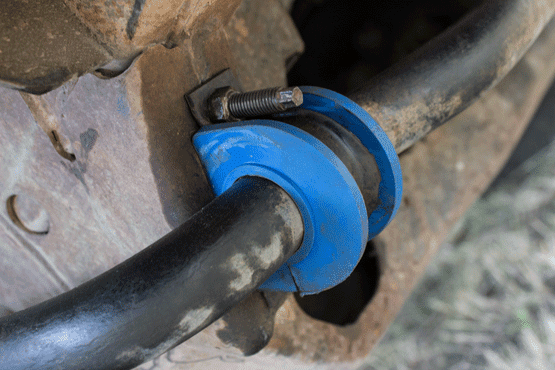 One of the new bushings, in designer blue

Best of all, NO. MORE. CLUNKING! The Rolling Steel Tent sounded like new.