I was near an REI when I was at the Coast, so I went in to check out their day packs and hydration packs. My current pack, an old Marmot Gunnison, is 30-something liters. I don’t carry that much stuff. Yeah, I can cinch it in some, but still… And it has so many pockets, and pockets within pockets, that I spend too much time trying to find what I put in it. Although there were several choices in the 13-20 liter range, there were none that spoke to me enough. So I checked out the rest of the store. 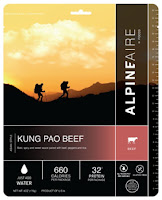 Ah-ha, freeze-dried foods. Several different brands, many choices. The Kung Pao Beef from Alpineaire Foods looked promising. Or at least interesting. I like kung pao, though I once learned the hard way not to try eating it in a restaurant that’s too dark to see the chiles. Woo! Fire!

I had one of those moments with this stuff, because the chiles aren’t as obvious. Not a good start. Once I recovered from the heat I was disappointed with the overall flavor. Take away the chiles and you’re left with a soupy sauce that could’ve been any number of dishes. And the beef cubes could’ve been anything. Cardboard, perhaps. So I won’t be recommending Alpineaire Foods Kung Pao Beef. Unless you just want to melt your throat.