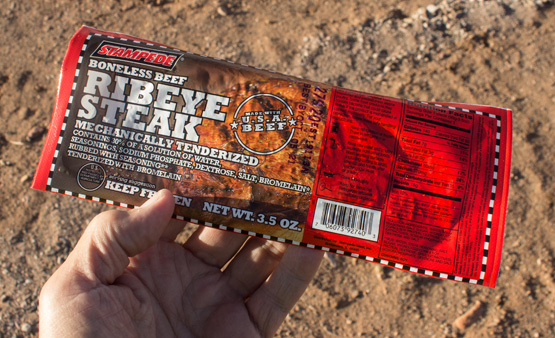 Meat prices are ridiculous these days. Well, just about all food prices are ridiculous, but particularly beef. So a dollar for something claiming to be ribeye steak? Sure, it’s not going to be spa-raised, caviar-fed, ultra-prime, imported-from-the-realm-of-the-gods beef, but, as I’ve said several times before, it’s only a buck. 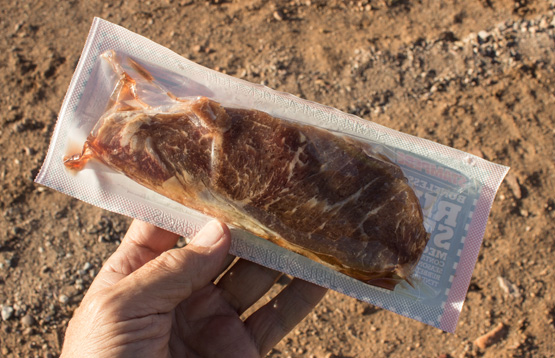 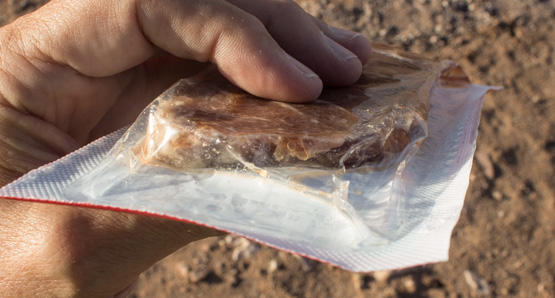 The steak comes shrink wrapped and frozen rock solid. It had thawed by the time the photos were taken. It’s not simply pure beef. Seasonings and tenderizers had been added. A little something extra for your money, I suppose.

I cooked it up with a little butter. It didn’t take long since it was only about a quarter inch thick. The label says it had been salted and rubbed with seasoning, so I added none. Until I tasted it. It needed salt and pepper. I suppose that’s better than it coming oversalted. 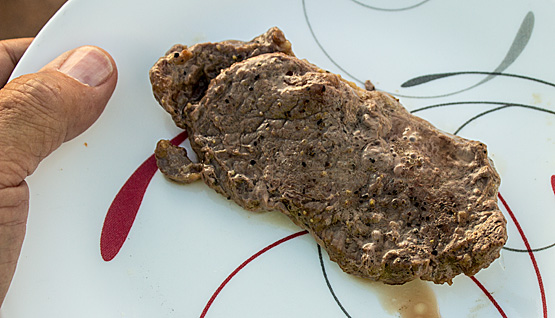 The package also claims it was tenderized both mechanically and with bromelain (which, according to WebMD, is a group of enzymes found in pineapple juice and in the pineapple stem). Now, ribeye is supposed to be one of the most tender cuts, so why all the tenderizing?

Because it needed it. Desperately. This was one of the toughest pieces of meat I’ve ever had. Maybe that’s a plus. It makes the small steak last longer. All that chewing takes time.

I guess if your keto diet requires more meat than your bank account can provide, or if you’re totally addicted to anything even vaguely resembling steer, then this stuff is an option. But not a very good one.