Box Canyon runs from Mecca, California, at the top of the Salton Sea, to I-10, just south of the Cottonwood entrance to Joshua Tree. Now, according to the definition, a box canyon has no outlet. But you can drive all the way through Box Canyon. Maybe it got its name from a box that was left there. Things have been named for dumber reasons. 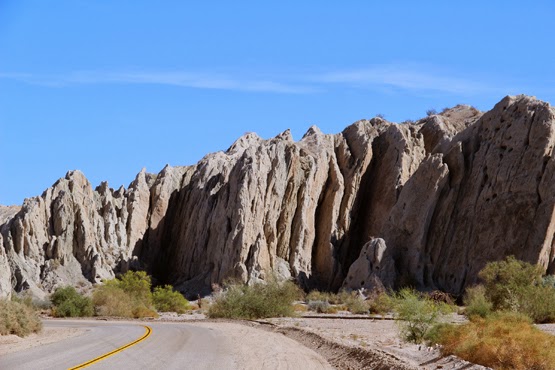 The Mecca end of the canyon is below sea level. The other end is at 1,500 feet.

The drive up Highway 111 from Niland to Mecca also gave me a chance to see the east shore of the Salton Sea. Most of the way it's rather bleak looking. I tried to imagine the treeless, crusty, barren dirt was sand and that I was driving along undeveloped oceanfront. It almost worked.

Claiming the Salton Sea is no longer a stink hole of dead fish, flies and toxic agricultural waste, the state has created a handful of beaches/campgrounds. Most are just a parking lot, a couple of picnic tables and some toilets. Some folks like that kind of thing. Mecca Beach is nice though, with a palm grove and the shade it provides.

Speaking of place names, the town of Bombay Beach is totally not a romantic spot. (Consult Google Street View if you don't want to take my word for it.) And the actual beach was closed, which might have been a public service. "Don't waste your time, folks. Trust us."

The north end of the sea is lush with date palms, grapefruit orchards (which I thought were oranges until a grapefruit fell from a tree and rolled across the road in front of me), vineyards and fields of assorted produce.

I'll close with a travel tip: Even if all the other gas pumps are being used, don't pull in behind the guy with a trailer of ATVs. Unless you need a nap.