Don't get too bold, kid

I went exploring again yesterday. The lady at the SNRA office had suggested Baker Creek Road. "There are a number of campsites along it, but the last one before the road closure gate is particularly nice."

Yes, the last one was a nice site, and it was occupied. But just opposite was East Fork of Baker Creek Road. Ooo, what's up there? I mean, it has a name and a sign, so it must go somewhere significant.

The road climbed and got narrower. And rougher. Walnut sized rocks in the road became lemon sized ones and then potato sized ones. I crawled and bounced along. There was the mountain on one side of the road and the cliff on the other. No places to turn around. Certainly no places to camp. Maybe further up.

I came to an open gate with signs telling snowmobilers to stay on the road. Snowmobilers must come up here for some reason. I pressed on, imagining the road would lead to an open area somewhere near the top of the mountain or would descend into the next canyon.

The road was getting very marginal. Another "road" forked off steeper up the side of the mountain. It was more like a mountain goat trail. No thanks.

The road started to descend. Ah, I thought, it's headed into a valley. No. It just made a hairpin turn and started up again.

Ah, man. Doing this in a Jeep, with someone following for backup, would be one thing. But alone in a big old van was probably foolish.

I eventually came to a spot wide enough to execute an eight- or nine-point turn. I got out to assess my progress and discovered my blind side was about an inch from scraping against a tree. Good thing I'd checked.

The return trip was only slightly less worrisome. I kept thinking about what would happen if I encountered someone coming the other way. It was a one-lane trail with absolutely no room to squeeze over and pass. And I suck at backing, even on wide paved streets. Backing up a mile or so on a winding narrow road would be impossible for me.

When I finally made it back to the turnoff, I pledged to myself I wouldn't do something like that again. At least not without a local who knew the road. But I'd had an adventure I could share. A stupid one, but still an adventure.

[If I'd had cell reception and could have checked Google Maps I would have learned that, indeed, the road eventually opened up into wide hilltop clearings suitable for camping or tearing around on snowmobiles. Should've pressed on.] 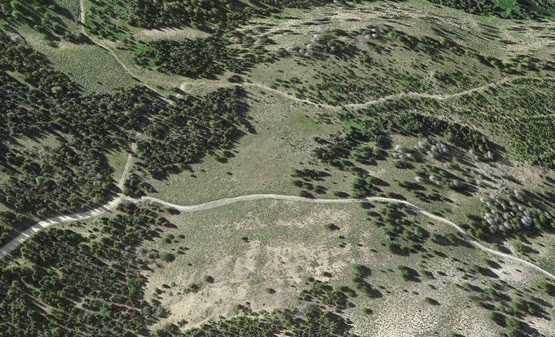