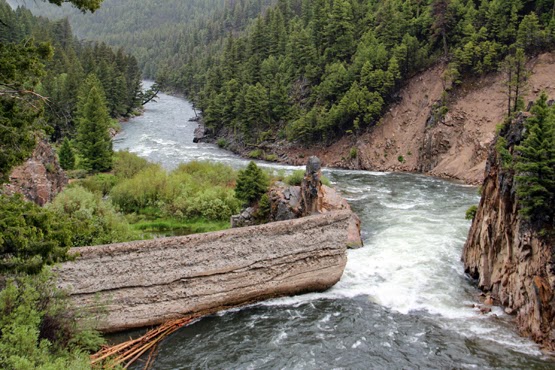 This is the remains of the Sunbeam Dam on the Salmon River. Others have told its story better than I can, so I'll quote from the Osprey blog:


The Salmon River is the longest undammed river in the continental United States. But it wasn’t always that way.
In 1910 Sunbeam dam was erected on the Salmon above its confluence with the Yankee Fork. The dam was built to supply cheap power to gold mining operations along the Yankee Fork. The dam supplied power to stamp mills and dredges for just over a year before the mining operation went bankrupt and closed.
A historical marker adjacent to the river claims that the Idaho Department of Fish & Game contracted demolition of the dam in 1934.  However, locals know a different story. Idaho Governor Cecil Andrus wrote in his memoir, “A party or parties unknown ran a dynamite-laden raft into Sunbeam Dam. The dam blocked the annual salmon run. The party or parties unknown were never caught, a fairly unusual circumstance in this thinly populated country.”