Downtown on a Saturday night

The semi-secret spot where I semi-stealth camped on Friday night was full. Hmmm, where to go? On the way to various beaches and parks I had noticed downtown Ventura has a lot of street parking and a surprising lack parking restriction signs. There are occasional signs, in sensible places, declaring No Parking At Any Time, but otherwise... nothing. Going by the philosophy that everything which is not forbidden is allowed, I concluded the lack of signs meant I could park anywhere, at any time, for however long I liked.

And from the previous night's experience camped in a city cul-de-sac, it seemed like Ventura law enforcement chose not to worry about people sleeping in vehicles—if there were ordinances against it.

So, I found a short block downtown, with not much traffic, next to a vacant lot and office buildings, and settled in. A small RV arrived later. Then a pickup with a shell. 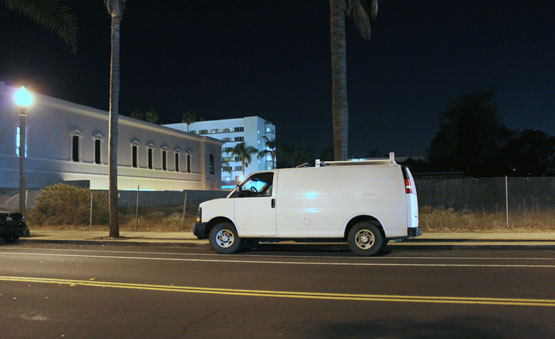 There was only a little traffic noise. Couples walked by. There were occasional cyclists and skateboarders. People out for the evening. Very low key. No feeling of danger. No visit from the police. I slept well—and didn't commit any criminal acts.