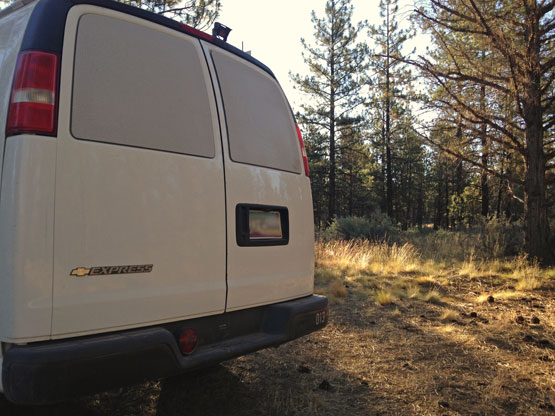 I drove up a narrow Forest Service “road” in search of the ultimate camping spot. Trees and bushes scraped along the sides of the Rolling Steel Tent and it looked worse up ahead. You know you’re off the beaten path when bushes are growing between the wheel ruts. I needed to find a place to turn around. Soon. I came to a spot that was slightly wider. “Well, this will have to do.”

I started what would end up a fourteen-point turn, backing into bushes and saplings, cranking the wheel the other way, pulling forward until I kissed trees. Repeat. Repeat. Repeat…

By the ninth or tenth point I had gotten impatient, frustrated, and a little panicked that I’d get myself stuck. I got more aggressive. And a little irrational. Thicker growth moaned and shrieked against the bumpers and body panels as I backed farther into the undergrowth. No doubt I was collecting some dents, but I wanted out. Now! I was finally free.

I pulled into the site I should’ve taken before my fruitless quest for something better. I checked the van for damage. Except for scratches down the sides to go along with all the others I’ve accumulated over the years, and some new gouges in the rear bumper, and pine twigs littering the roof, everything looked okay.

But when I went to open the back door, it wouldn’t unlatch unless I pushed against it first. Aw, man, I had tweaked something. Bowed a door? Bent a hinge? It wouldn’t be tragic, but it would be inconvenient. Sigh.

Today I made a run to town, and when I used the back door it came open just like it always had before my encounter with the forest. Yay, the door is fine! It was just a matter of how I had parked at the campsite. The van had been fairly level, but the left front and right rear wheels had been high and the other wheels low, which twisted the Rolling Steel Tent just enough to skew the back doors and cause the latch to bind a tiny bit.

Now all is right with my microscopic part of the world. It doesn’t take something exceptional to make me happy. It’s enough that something bad didn’t happen.