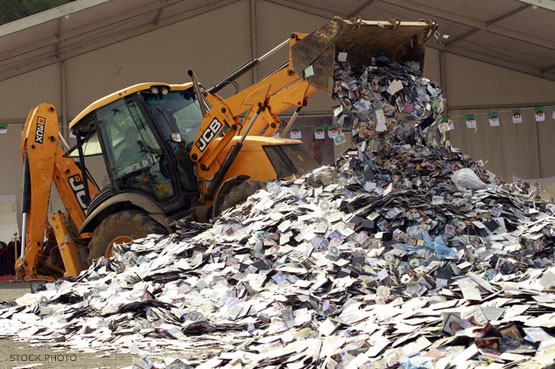 When I told my mail forwarder, Americas Mailbox, I wanted to step down a level of service, they tried to talk me out of it with threats warnings it would mean they’d no longer sort out my junk mail and I’d be buried under a mountain of the stuff and I’d be begging them to go back to the higher level and the extra postage would negate any savings in the plan and it would be a pain in the butt for them and…

Whatever. Just make the change.

So, as I waited yesterday for the postal clerk to retrieve my latest shipment from General Delivery, I pictured a big courier pack bulging with junk mail. There might even be a box of it. Maybe they shipped me a crate of other people’s junk mail just to make me regret my decision.

But it was just the usual large envelope, thin and light. It contained:

I’ve been away from the consumerist mainstream long enough to fall off junk mail lists. “Put this guy in the Ain’t Gonna Be Spending Money On Our Crap pile. He’s debt-free and hasn’t used a credit card in five years. He’s useless to us.”

Yeah, so bite me.

UPDATE: So here it is, October 5th, over two months since the last time I bothered having mail forwarded.  This time there were just the bank statements for August and September.