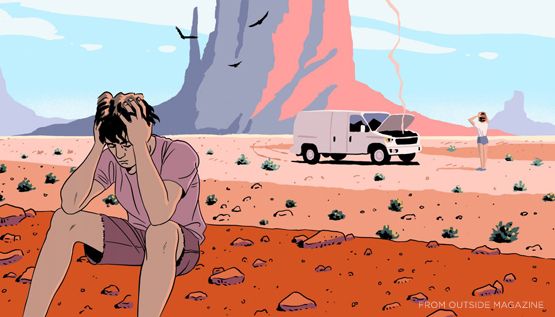 As I’ve said many times before, I’m lucky. I found a life I love and it’s working for me. It doesn’t always go so well for my fellow nomads. Their dreams become nightmares.

Chris Wright tells the story in Outside of the months he and his fiancée spent traveling the country in a van. As in the article I shared before, their intent was to live the van life in an anti-#vanlife way.


There was an important caveat. We decided to reject the cushiness of #vanlife and skip the saccharine Instagram posts. This was partly out of necessity—we didn’t have the budget for a $10,000 vintage van and a $10,000 overhaul. But we also feared the Instagramization of our lives, seeing the mountains through the lens of our camera phones. I rolled my eyes (though secretly a little jealous) at the shirtless #vanlife guys whose long captions detailed the importance of learning how to fix a timing belt with a shoelace. Rachel damn sure wasn’t going to sit naked on the roof of the van for a photo shoot every few sunrises. Social media of any kind was officially banned.

We decided, instead, to take the path of the van bums: the transients, the weirdos, the indie bands with no money.

Their first mistake was buying an unreliable van. Their freedom machine became an anxiety generator. What would fail next? Would they become stranded? And, because their second mistake was underestimating their expenses, could they afford repairs?


If I was obsessing about a breakdown, I was also fixated on money and the way it seemed to flow through our wallets like water through a sieve. Living out of a van can be surprisingly expensive, especially if you’re burning through gas on long drives every couple of days. I had underestimated our costs. Working would mean stopping, extending the trip, spending even more money. I kept thinking about the saying “so poor you can’t keep mosquitoes in underpants.” I only had three pairs. We didn’t need much to survive. But the list of things we could afford was shrinking fast. I was sinking into despair: over van noises, over dollar signs, over anything and everything.

I’m not posting this to discourage aspiring nomads. I mean it only as a reality check and to stress two important points. 1) Get the most reliable vehicle you can find and afford. 2) Have a continuing source of income.

Like many people who go on a journey to discover the country, Mr. Wright also discovered some things about himself.


Here’s what living out of a van was: a massive stretch of raw adventure and also an earthquake, destabilizing my life, showing me I didn’t really know all that much about risk, privilege, happiness, failure, and my own mental state.

Keep your dreams, nomads-to-be, but also keep your head on straight. And hope for luck (although luck is not an emergency plan).