I had a video conference with my oncologist this morning. According to the PET scan, everything is good. I have no symptoms and feel great. He wants me to check back in six months.

Afterward I packed up and headed out. I need to go to Douglas AZ to take care of a small matter, then I’ll continue on to see Lou in New Mexico—even though it’s still below freezing at night there.

In preparation for cold I stopped by Walmart to get an electric heater. I could plug it in at Lou’s and let it run during the night. But, you know, with it being the end of winter in southern Arizona, the heaters have been replaced on the shelves by fans and air conditioners.

I went to another Walmart. Same story, but then I spotted a small electric heater on a different aisle. Clearance priced. It says it’s 1,500 Watts. I don’t know how to translate that number into heat. BTUs make more sense to me. We’ll see if this thing does any good.

Since I didn’t get out of Yuma until after lunch I decided to break the drive to Douglas into two parts. So I’m camped just outside Ajo, up Darby Well Road. The area is thick with desert plant life. But not overly thick with boondockers. 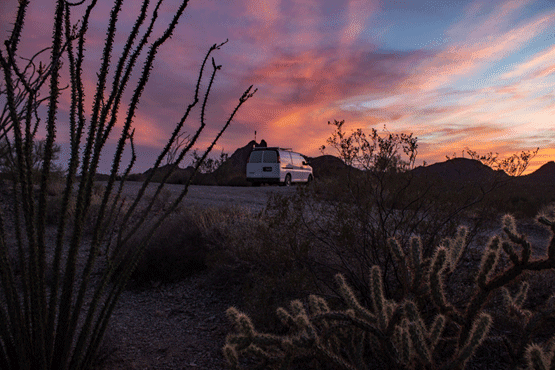