It’s not always the same

I wanted/needed to get out of my beloved California. It wasn’t a good time to be there. To the immediate west all the National Forests in the Sierras were closed. To the north Lake Tahoe was on fire. To the south the desert was burning hot. So… east? Into Nevada? Across Nevada? Some of the emptiest, driest, most barren land in the country? I had crossed Nevada before and it had been rather brutal. High heat and high wind on one occasion. Nearly freezing and nearly snowing on another. It’s a place where you get twice the miles for your money. Each mile seems twice as long. At least it’s not flat and monotonous like the plains states. But… sigh… it looked like the way to go this time.

I googled some routes, distances and drive times. Less than five hours to the other side of the state, to Ely? (Pronounced EE-lee, for those not familiar with the place.) That wouldn’t be horrible. Especially if I started at the crack of dawn and beat most of the heat. 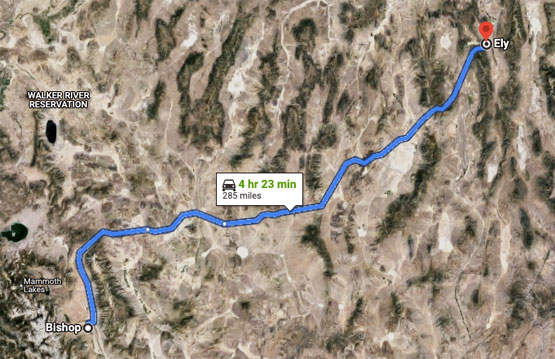 And, actually, it was quite enjoyable. Smooth, empty highway. Cruising along with the window open. Short pauses at rest stops to get the circulation back in my thighs and butt, a dip into the infamous Clown Motel in Tonopah to buy a sticker. And, for the first time ever, I was at my destination before I expected it. Had the clown ghosts worked some kind of time warping juju on me? If so, thanks!