I'm writing this in the middle of the night 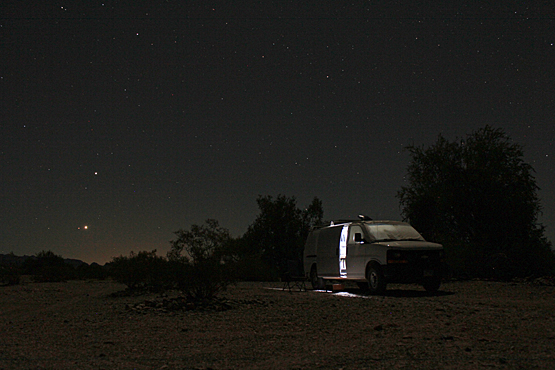 Mars and Jupiter are up at this hour, too

I love sleep. L-O-V-E love it. I want to marry it. Now that I'm retired and don't have to fit my life into society's schedule I can sleep whenever I want, for however long I want.

One of my favorite times in the sleep cycle is when I become just conscious enough to know I'm sleeping, when my body is trying to drag me back down down down into that delicious warm, floaty, womb-like state, and I think, "Sure. Let's go-o-o-o-o-o-o..." Mmmmmm, yes.

We modern humans have been conditioned to think we need eight straight hours of uninterrupted sleep each night. But that's a product of the industrial revolution, light bulbs and the Protestant work ethic. Take away external scheduling forces, artificially extended daylight and the belief sleep is laziness (or that it's our "job" to sleep a certain way) and we humans would really rather sleep in something more like two four-hour blocks in the course of the night. It's what we used to do before we messed ourselves up.

Now, when I wake in the middle of the night, I have the luxury of not fighting it. I don't curse myself for not being able to turn over and fall right back to sleep. I use the time instead. I think, I read, I take night photos and write blog posts about being awake. Then I go back to sleep. Deep and wonderful dream filled sleep. Later, I'll take a nap. Or two. Because I can. Because I don't feel guilty about it. Because sleep is my lover. Hold on, sweetheart. I'll be with you in a moment. Just let me hit the publish button.