Evicted from the rich people's campground

Rincon Parkway is a stretch of Highway 1 in Ventura County. It's an unusual "campground." A wide shoulder is marked off into sites. It's first-come-first-served and hard to get a spot. Some people stay the whole summer. 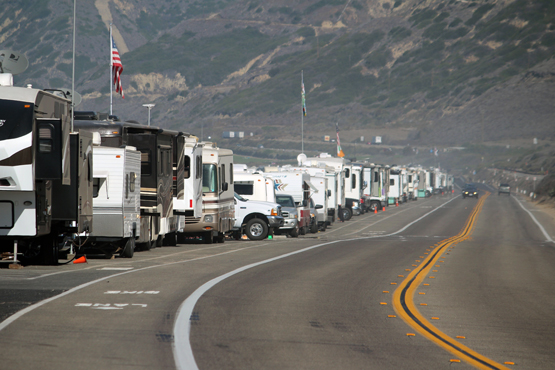 So, why would I want to camp in a quarter mile long row of RVs, with highways 1 and 101 and the railroad tracks at my back door? Because it's right by the ocean. And because I haven't stayed there before. The problem is, the place is restricted to "self contained" RVs. You have to have a toilet and holding tank. (Hey, my bucket is a holding tank.) That means only actual RVs and travel trailers. That means only people who have the money for such things. I thought I'd give it a shot, though.

I had barely stopped (woo-hoo, a vacant space) when a county ranger told me I couldn't stay. She was nice about it, and admitted my bucket should fit the rules, and that RVs were harder on the environment, but she had to go by the book. Sigh.

There are two regular campgrounds at either end of Rincon Parkway, but they're always full, too, with long term RVers. That's part of what makes camping on the California coast difficult. And expensive. It is, after all, the place a lot of people want to be. Including me. 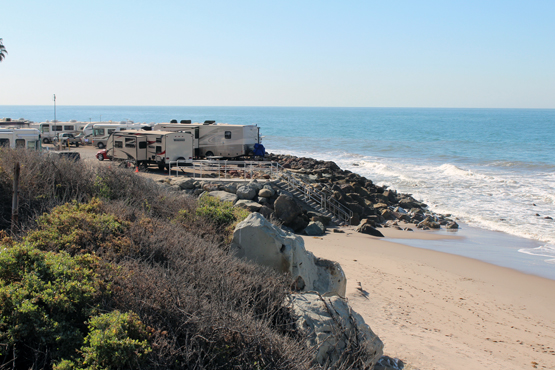 So I'm spending the morning at the day use area, blogging and staring at the waves. Then I'm off to Burbank to spend the weekend with some old friends. Free. With no restrictions.