Back at the ocotillo spiral 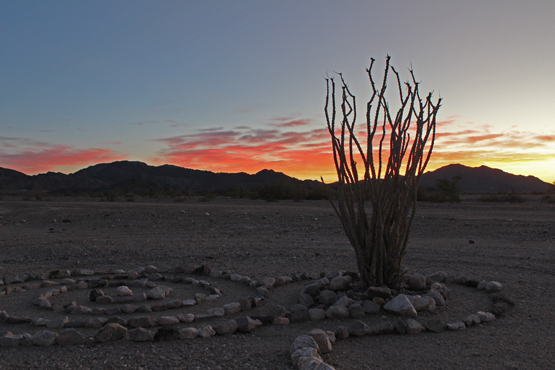 The drive from San Felipe to Los Algodones was uneventful. Once at the border, though, there was a horrible line. It took two hours to creep about a half mile. I should have known better than to come on the weekend, when a lot of Mexicans go to the US to shop and visit relatives.

Unlike the last time I returned to the US, via San Luis, border authorities just took a quick look in the back of the Rolling Steel Tent to make sure I was alone.

But once that was done, I settled into my second most favorite desert spot, off American Girl Mine Road, between the Colorado River and the Imperial Dunes. The air was calm and the nighttime temperature wasn't too chilly. After taking this sunrise photo I stocked up in Yuma, did laundry, and drove to Ehrenburg to meet Bob and edit more of his videos. Except he's not here yet. Guess I'll take a nap.