The old saying is that if you fail to plan, you plan to fail. That's only part of the story, though. You can plan the hell out of something, but you can still fail because there was something wrong with the plan. I had a failed plan last week, and I recently talked with someone who was in the middle of a failing plan. So I'm going to share some thoughts on the subject. And I'll try to follow my own advice.

The more parts of a plan that depend upon things beyond your control, the lower the likelihood of success. 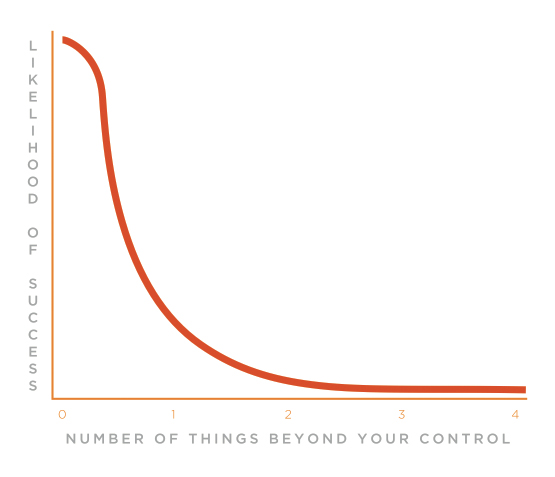 You can control what you do, and you might have some solidly dependable people in your life, but beyond that, you can't really control others. Blanche Dubois might have depended upon the kindness of strangers, but it's a bad plan for the rest of us.

You can't control people, or the weather, or institutions, or market fluctuations, or anything else that can throw a monkey wrench in your plan. It's risky enough having one uncontrollable thing in a plan, but sometimes our plans are built on several of them. The likelihood of failure increases exponentially. You could be doomed before you start. Unless you have a huge pile of luck. But:

Las Vegas was built on people wrongly believing in luck. It's called luck, rather than a sure thing, because it's the least likely thing to happen. Luck is not only the weak link in a plan, it can be the poison pill.

The more complex a plan, the lower the likelihood of success. 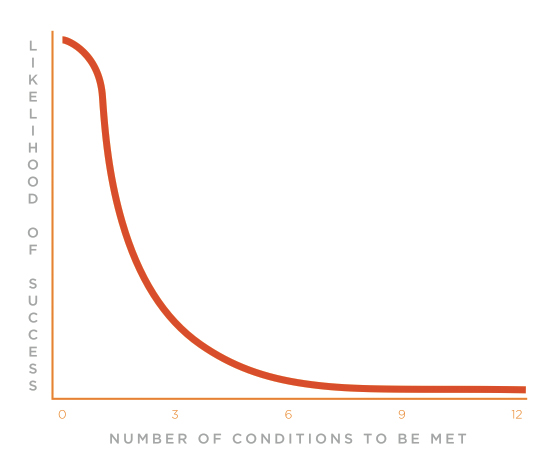 Yes, this looks like the first graph. It's the same principle. Even though the plan might be free of things beyond your control, you might have too many ducks to get in a row, too many cats to herd. Too little time. Too little skill. And so on. Less is more. If a plan can't be simplified, break it into several smaller plans. How do you eat a whale? One bite at a time. Having several simpler plans also allows you to feel successful sooner and more often.

The more rigid the plan, the lower the likelihood of success.

Flexibility is a virtue. Our bodies, for example, are rigid parts held together by soft stuff. The more flexy bits a plan has, the better. Because we can bend the plan to fit the situation instead of trying to bend things that are beyond our control to fit the plan.

I had planned on writing more, but I'm going to be flexible and end it here.