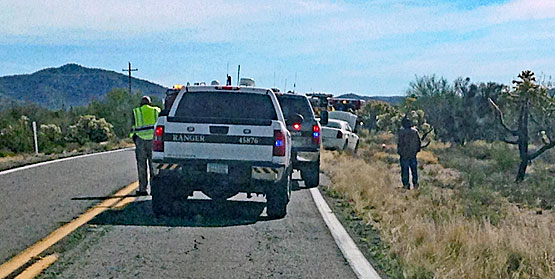 Somewhere between Why and Quijotoa I saw flashing blue and red lights ahead. Then I saw flashing blue and red lights approaching from behind. I pulled over and stopped. A ranger, a sheriff's deputy, a tribal policeman, ambulance, fire truck, water tanker, flatbed tow truck and two Arizona DOT trucks had converged on a white Chrysler 300 angled on the shoulder, hood up, driver standing back. All we were missing were a SWAT team, the Border Patrol, and a news helicopter.

The car didn't look wrecked or on fire. I didn't see anyone being hustled into the ambulance (which is good). Some water was sprayed on the grass around the car and a firefighter fiddled under the hood. My guess is the car started boiling over and the driver thought it was burning and called 911. It mustn't have been too serious a problem because the tow truck left first, empty.

About twenty minutes later enough emergency vehicles got out of one lane so traffic could be waved through. The emergency personnel were just standing around when I drove past the scene. I guess it was a way to spend a morning.