It’s a little different driving in Oregon, and two of those differences are changing. In some places. Maybe. We’ll see. 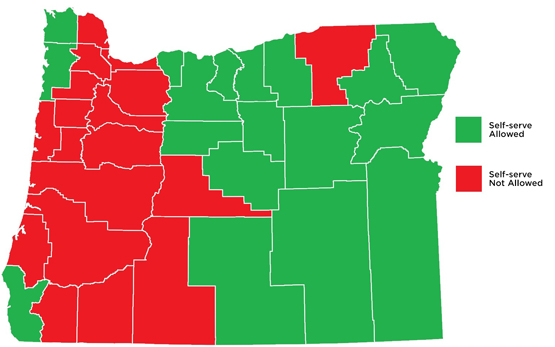 There used to be no self-serve gas pumps in Oregon. Now gas stations located in counties with less than 40,000 residents are allowed to offer self-serve gas. Like the rest of the country. Except New Jersey. Those troglodytes.

(To complicate things, overlay the map of Oregon counties that can allow or ban cannabis shops.)

Self-serve was just starting out when I was a new driver. I had tried getting a pump jockey job because I loved cars. So when they started letting us pump our own it was a bit of teen dream fulfillment. But I’d still let the attendant pump my gas if I were headed to work or on a (rare) date and didn’t want my hands smelling of leaded regular.

The first time I encountered Oregon pumps I was standing outside the Rolling Steel Tent, reaching for my wallet, when an attendant scurried up. “May I help you?”

“Just getting some gas.”

“There’s no self-service in Oregon.”

It felt very wrong to give my card to the attendant, what with the danger of identity theft and other scams. And if I used cash, how do I know he/she didn’t just pocket it? But that’s how we always used to do it and we didn’t think anything of it. Oh well.

Back in the olden days, self-serve gas was slightly cheaper because they could sell more gas yet with fewer gearheaded high school boy employees. And if they could train average folks to pump their own gas they could get rid of all the workers. I’m eager to find out whether Oregon stations with the self-serve option will also have two-tier pricing. Because if it’s the same price either way, fine let them pump it for me, and keep someone employed. 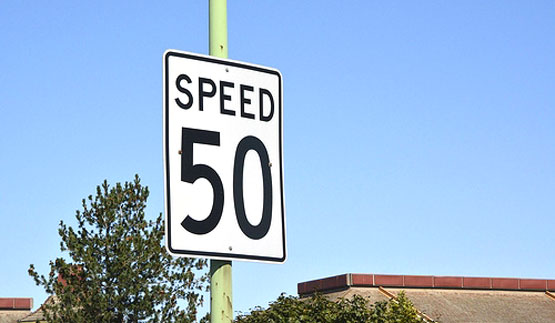 Another Oregonian quirk is their speed signs. Not speed limit signs. The state had its reasons, I suppose, like allowing the number to be larger, or to remind you you’re in Oregon now in case you were thinking you were still in, oh, Idaho (where you gassed up because it’s slightly cheaper).

However, I think there’s also a subtle difference in meaning. Speed limit means, “Drive no faster than this. Slower is okay, but not faster.” Speed by itself means, “This should be your speed. Not faster or slower.” It’s speaking to both the speeders and the slowpokes. At least that’s what I like to think. I like to think a lot of things I know aren’t true.

However, you’ll see speed limit signs on certain roads, like Interstates, and in populous cities. And word has it newly installed signs will say speed limit, but no old signs are being switched out. Maybe that will be determined by county, too.