It was after dark and I was reading in the Rolling Steel Tent. Suddenly the area outside lit up like a UFO hovering overhead.

I looked out the window and saw three vehicles with blazing light bars facing me. I thought a group of off-roaders was looking for a camping spot. I opened the door and gave my best WTF look. A voice over a speaker said, “Show me your hands.” Um, okay. I also stepped out.

A law enforcement officer stepped from the side and asked, “How are you tonight?”

I thought, what is this? Rangers checking to see if I had my permit? I answered, “I’m fine.”

“We had several reports of someone yelling, swearing and threatening people.”

“Oh, that must be the guy in the blue van over there. I heard a bunch of yelling but I thought maybe it was a loud TV or something.”

“Did anyone come over here and bother you?”

He and the other officers converged on the blue van. I was curious what would happen, of course. Would mayhem ensue? Would there be an arrest? I grabbed my camera and watched.

It was all very calm. The officer who’d spoken to me talked with the two van dwellers. One sat in a chair and the other sat on the ground leaning against the van. The one in the chair was gray-haired and the other was younger, with blue hair. A father and adult son, perhaps. The older one seemed to be doing the talking. Everyone was calm, except maybe the younger one who mostly stared at his feet. At first I thought he’d been handcuffed, but then I saw his hands move apart. The officers left after about ten minutes. 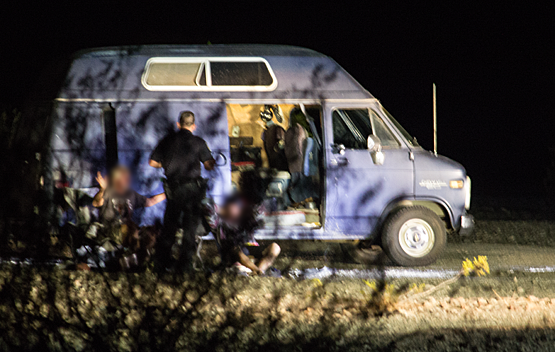 It’s only my guess, but I think all the earlier yelling was due to the younger one having some sort of mental condition and his medication (if he was taking any) hadn’t been working. Or maybe he had just been drunk.

So, things have been quiet and calm the past few hours. I’m glad things didn’t get ugly. However, if the blue van is still here tomorrow, I might move farther away.

UPDATE: They moved on shortly before lunch.