Yet another adventure in the dark

Last night I took a break from reading and stepped outside for some fresh night air and a little star gazing. That’s when I saw the fire. 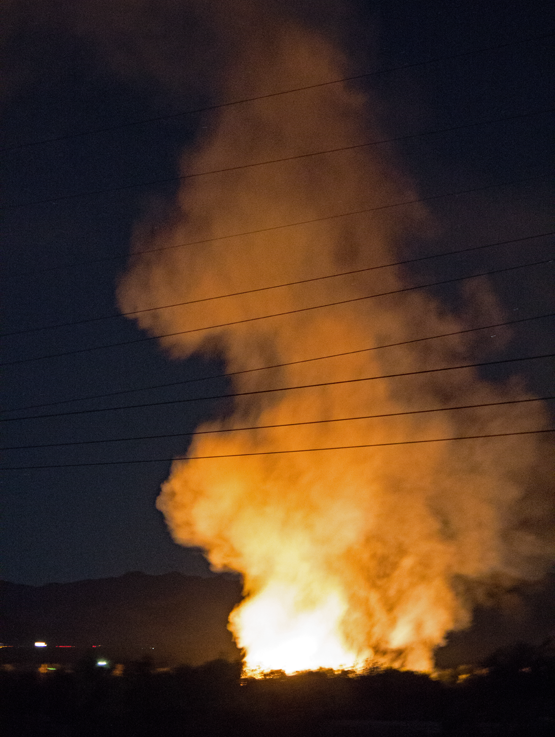 At first I thought a fellow camper had a ridiculously huge bonfire going. But as I walked toward the blaze my perspective and sense of scale shifted. It was somewhere outside the Hi Jolly dispersed camping area. A semi went past on the highway, revealing the fire was on the other side of Highway 95 and at least a quarter mile away.

What was burning? And why hadn’t I heard any sirens? None of the smoke was black, so it probably wasn’t a structure or vehicle. It didn’t seem to be spreading, so it probably wasn’t vegetation. (There’s not much of that to burn anyway.) Passing vehicles didn’t slow down to gawk. Was this a regular thing, no big deal?

Part of me wanted to walk over to see what was going on, but the wiser part of me didn’t want to go stumbling around in the dark and end up skewered by cacti.

So I hiked as close as I could this morning. A thin wisp of smoke was still drifting upward. It looked like it was somewhere behind the water treatment plant. Fences kept me from getting close enough to see anything. 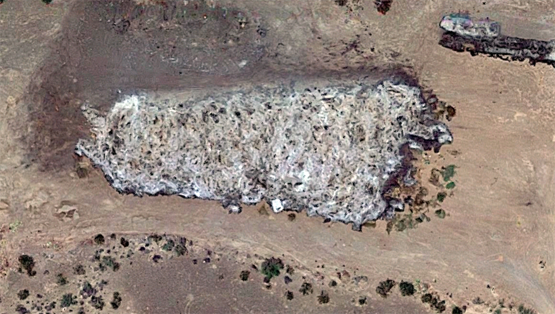 Back at the Rolling Steel Tent I fired up Google Maps satellite view. What was behind the water treatment plant? A pale oblong blob of something. A rock formation? Then I noticed the thin shadow line along the south side. The pale oblong blob wasn’t a mound, it was a depression. A pit? Of… something? Something flammable? Some byproduct of water treatment? Or was it stuff brought over from the nearby refuse transfer station? If so, why dump and burn it there instead of hauling it a few more miles to the landfill?

I guess if I really wanted the answer I could ask various official sources. But I think I’d rather hold onto the mystery.