When one becomes a full time van dweller (or even a big RV dweller) it's assumed having a big, fancy house has become unimportant. Since setting out on the road, my idea of a minimally acceptable dwelling has readjusted considerably. Not because any building would be better than living in a van. (I still love van dwelling.) Rather, because I just don't need much anymore.

As I drive along, I keep seeing small abandoned buildings in pastures or in rural towns. I think, "Clean it out, fix the windows and doors, patch the roof, and I'd be in business." Electricity, running water and indoor plumbing would be icing on the cake. Living in a one-room shack like the Unabomber (though without the explosives and misanthropic insanity) doesn't seem like all that nutty of an idea. 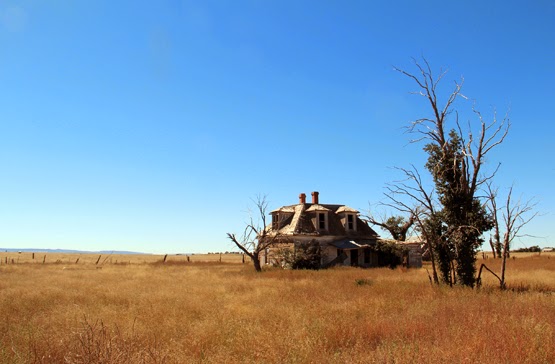 Okay, a place like this one on the outskirts of Estancia, NM, would be too hard to make weather tight,
and would probably be unsafe, but it would make a great haunted house. Boo.

The trouble with such a home, though, is that it would be stuck in one place. Maybe that's an appeal of the Tiny House movement. Minimalist and mobile. Like a van.