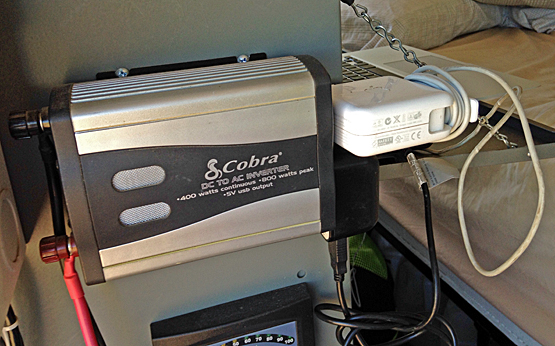 My electrical inverter isn't fancy, but it suits my needs. Charge my electronics, the batteries in the lights, the camera battery. Occasionally run my hair clippers. No problems.

When inverters get warm, from the electrical load passing through them, or from the weather, or from both, a fan comes on. Mine has been doing as it should.

Then a few days ago, I noticed the fan was on with very little load and in cool weather. Hmmmm.

Then the fan started spinning slower and slower. It has never done this before. Hmmmm.

Then the fan stopped. Hmmmm.

Was the inverter starting to go bad on me? It was still charging, so was it just the fan? Or the circuitry controlling the fan? Would the lack of a fan eventually cause the inverter to burn out? Hmmmm.

I figured I'd keep using the inverter and see what happens.

Today, while charging my laptop and JetPack, the fan came on again. So it's not dead. At least not yet. Hmmmm.

Maybe the problem was the altitude. ;)

UPDATE: Since originally posting this about a month ago, the inverter has been acting perfectly normally. So maybe it was just a one day thing. Or maybe I had been imagining things.