Story of a photo 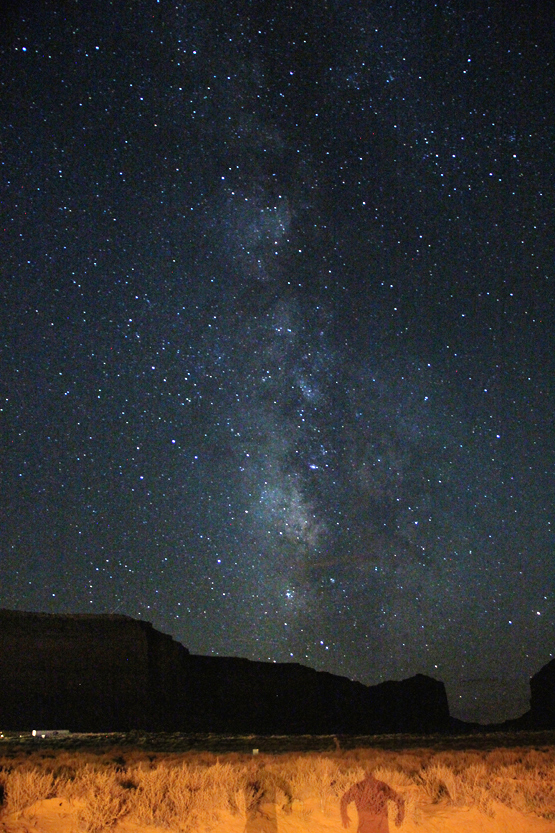 I wanted to take a shot of the Milky Way over Monument Valley. There was a narrow time window between the sky getting dark enough for stars to show and the rising of the moon.

A half-to-full moon causes two problems. One is that it overpowers most of the stars. The other is that with the long exposures necessary to record stars, moonlight makes everything else look like daytime. That can be interesting if that's what you want. It wasn't. Not this time.

The Milky Way doesn't care what photos I want to take. It's just a swirling mass of stars. It's going to be where it's going to be during my shooting window. Too bad if I'd prefer it to be over one of the more dramatic, iconic Monument Valley buttes.

Human lights also added to my problem. You'd think Monument Valley would be totally dark, being out in a remote area and all that. But I had a hotel on one side, guest cabins and their porch lights on the other, and the camping check-in office behind me that was lit up like a fast food joint. Then there were vehicles coming and going at all hours. Sheesh, people, it's 2:15. Settle in or something.

But I saw an opportunity. I positioned myself where the lights were behind me. They could light up some of the foreground sagebrush. Oh, look, there's my shadow. Twice. What if I posed like the guys in petroglyphs I saw the other day? I don't have horns, but... Cool.

Then, in the middle of an exposure, a car's headlights lit up the road between my position and the mesa beyond. An extra touch of dimension and layering. I could work with that.

Though it's not the photo I had set out to make, I think it's more interesting and unique.