I have the back door of the Rolling Steel Tent open most of the time, for ventilation and a feeling of greater space. It's usually still open come bedtime. Then (grumble grumble) I have to get up, put on my shoes, go out to the back of the van to close the door.

"It would be great, " I thought many times, "if I could close the door while still in bed." I spent a lot of falling-to-sleep time thinking of contraptions. Rods... hinges... springs... rare earth magnets... linear actuators... photon torpedoes...

It's a good thing I don't immediately try to build the first or second ideas to come along. I save myself a lot of trouble. "He who hesitates doesn't get neck deep into dubious projects." Right? I think it was Aristophanes who said that. Or Bob Vila.

Then the solution came to me the other day. Duh. 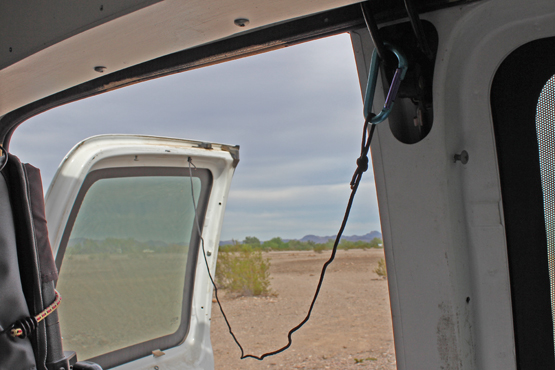 There were already screws in the window frame that used to hold wire security grates. And the loop thing is for the door latch. I used a spare carabiner so I could unclip the cord whenever it would get in the way.

This setup also makes it easier to open the back door without getting out of bed. Before, I'd have to give it just enough of a push (repeatedly) for it to catch in the first detent without it coming back or swinging all the way to the second detent. Now I can just unlatch it, give it a hard shove, then pull it back until it catches the first detent. (I don't know why I don't like the door open all the way to the second detent. No rational reason. It just seems wrong.)

Next up is some way to hold the door open only a few inches. It might mean scrapping this solution. Or maybe not. I'll need to think about it for a couple of years.