Between Willcox and Safford, Google Maps showed a line running west from US-191. A line thick enough to mean it was paved. A line that seemed to stop in the middle of nowhere.

I zoomed in. Highway 266, along the south slope of Mount Graham. It doesn’t just stop, it goes to the town of Bonita. And an Arizona State Prison. Then it becomes a smaller road.

Hey, most of that along there is National Forest. I wondered if the satellite view would show some boondocking areas. Zoom… scroll… scroll… mmmmmmm… no… scroll… scroll…scroll… There were none that I could see, but there was a campground.

I looked up Stockton Pass Campground on the Forest Service site. Free (free is good), open year round, about 5,600 feet up (it wouldn’t be too warm), a variety of trees, vault toilet… horse corral… It sounded promising.

FreeCampsites.net had a review. It said the toilet was old but clean. What more could I ask for.

The campground road got a little, um, rustic after it crossed a cattle guard. Ruts, washouts, et cetera. To the left was a parking area, the old-but-clean toilet, and a sign that said Group Camp, along with notices it was reserved. To the right, over even more rustic single tracks, was the corral and some boondocking-ish areas. That’s where I found my spot. 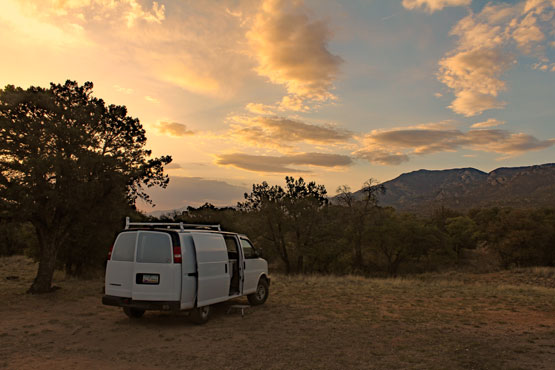 It was quiet until Friday evening when people started arriving at the group camp, and that was just the sound of vehicles thumping and bumping along the road. No big deal.

The drawback? No cell service. I spotted towers on a ridge, but with my binoculars I could see they weren’t cellular.

I decided to hang through the weekend. Better to hold onto the spot I had than to compete with other weekend campers for a new spot. Meanwhile, I’m making notes of things I want to look up on the web when I have access again—like what’s the word on that campground I saw in my atlas? And what’s the forecast for Alpine AZ?