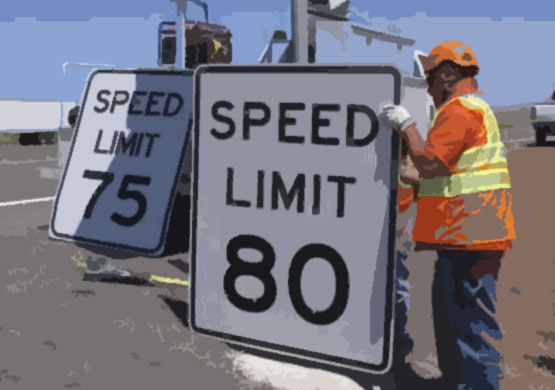 There are probably more opinions on what is or isn’t a safe speed than there are people. But our opinions (especially mine) don’t count for much. So, how are speed limits set?


A speed study consists of a review of the function, design and actual use of the road. Is the road intended for heavy commuter traffic or light local traffic? How wide are the lanes? How wide are the shoulders? Is it straight or curvy? Are there a lot of intersections? These and many other questions about the road get answered in the study.

(Even before that, though, highway engineers will have designed the roads with certain speed and traffic criteria in mind.)

Then traffic engineers measure how much traffic there actually is and how fast it’s going.


Then the engineer conducts a traffic count to determine the actual quantity of traffic and how fast the vehicles drive. This data provides the “85th percentile speed.” That term just means the speed at which 85 percent of the cars travel. On a well-designed road with an appropriate speed limit and effective enforcement, the 85th percentile speed should be pretty close to the posted speed limit.

Ah, but is the speed 85 percent of the traffic drives sufficiently safe?


The engineer also researches the number and rate of collisions on the road and compares them to the collision rate for the overall jurisdiction. Collision rates are the number of crashes per million miles traveled.

Then the engineers make their recommendations to the higher-ups. If there are too many accidents, lower the speed limit. If there are fewer accidents than on similar roads/streets, keep the speed as it is or consider raising it. If politics doesn’t get in the way, then the posted speed limit will probably be reasonable. Or reasonable enough. There will still be collisions. There will still be fatalities. Because there are no perfect speeds or perfect drivers. Speed limits are a compromise. Driving is a gamble—one that most drivers win.