It was a long day, mostly because of the waiting.

First, there was a blood draw. They want baselines on all the stuff they measure and to see if there are any red flags that would require a change in my treatment. We had to wait for the results and the lab was backed up.

Meanwhile, the nurse took me through a long list of possible side effects and what to do about them. Most of this info was in a stack of papers they gave me last week, but there was time to kill and I wasn’t going anywhere. I was glad to learn that a PICC line was unnecessary. I had been dreading having a tube run up a vein from my arm to my heart, plus needing to keep it clean and dry.

Lunchtime came before the green light from the lab. They brought around a food cart but it was all solid foods which I can’t swallow. But Ceebs had brought a thermos of soup.

The go ahead finally came from the lab and the drug was hooked up, along with an anti-nausea medicine. Since the two drugs can’t be mixed in the same IV line, one of them was run to my other arm. 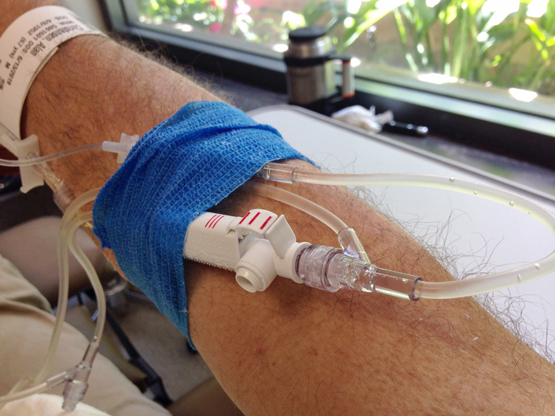 Some of the plumbing, and a window view

The insertion of the IVs was the least pleasant part of the entire treatment, and it was no big deal. The rest was just a matter of sitting there. And peeing. At one point I think I felt a low, mild buzzing in my body, but that might’ve been from sitting for a few hours.

Chemotherapy will be once a week. 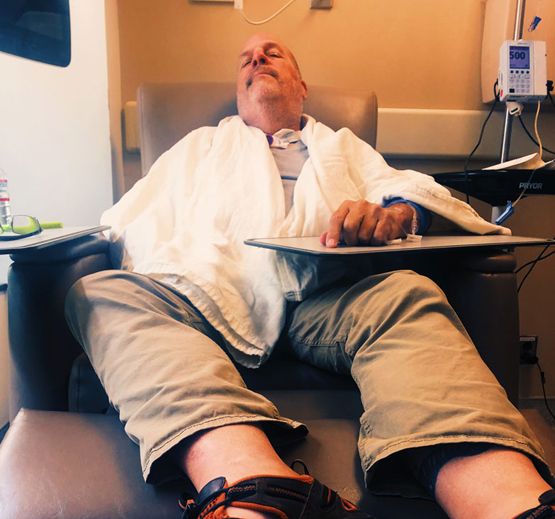 Because of the late chemotherapy start, my radiation therapy had to be pushed back. The chemotherapy staff took care of that. And it’s in the same building. I made it in time to radiation, but they were backed up, too. So I waited. And peed.

Radiation therapy was easy and fairly quick. My fear was whether I’d be able to swallow with the mask on. The various mouth and sinus fluids behave themselves pretty well when I’m upright, but going horizontal makes everything shift, causing coughing and the need for a lot of swallowing. The mask that holds my head in place also holds my mouth open a little. It’s hard to swallow that way. But things went fine. Maybe my body knew it was time to cooperate.

The ceiling of the radiation lab was black with star lights, like a planetarium. When the radiation machine moved around me it was like a telescope being shifted into position.

The machine circled 360° around me several times, back to front to back again. It has sort of an iris made up of dozens of segments that adjust to target the radiation to only the desired area—the tumor at the base of my tongue. The shape changes as it circles me. It was over in fifteen minutes. I felt nothing.
Radiation therapy is five days a week.

Side effects aren’t expected to manifest themselves for a couple of weeks. There have been none so far. Except the peeing. Oh, excuse me, I um need to, yeah…