I like my hard plastic folding chair. It tucks compactly between the end of the bed and the back doors. It also serves as a step stool when I tilt/un-tilt my solar panel. I had not been looking for a replacement or addition. Never mind that nearly all the other van dwellers and RVers I've encountered use folding fabric chairs that have arm rests, cup holders, and allow them to sit slightly more reclined when they bask in the sun or gather 'round the ol' campfire. Being different is my thing. 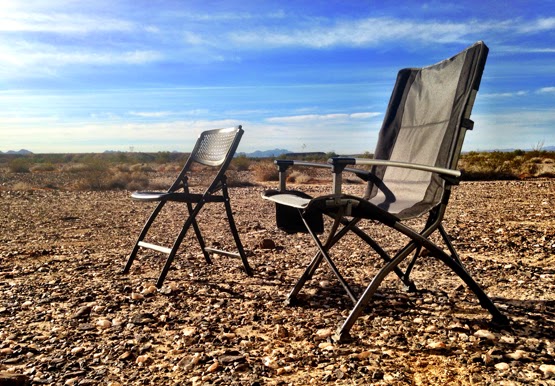 But Lou had a chair that didn't meet his needs. He had already acquired a replacement and wanted to get rid of the old one. In a moment of weakness I tried it out. Unlike many of this type of chair I've sat in, this one fit my body nicely. But would it fit in some storage nook in the Rolling Steel Tent?

One of my priorities is to be able to live comfortably in the van without needing to unload anything first. Just park it and use it. Would the adopted chair mess with the system I've set up? Well, only a little. It fits, inelegantly, on the floor between the bed and cabinet, leaving just enough foot space to use the "desk-dining table-nightstand." I could store it upright if I were to add some eye bolts and bungee cords to the end of the cabinet. But then it would block part of my already limited rear view while driving. Ah, compromises.

I think the new chair will be with me a while—at least through campfire sitting season, or until I meet someone who is totally chairless. In the meantime, I can seat a visitor.