From the ocean to the desert

Ortega Highway runs from San Juan Capistrano over the mountains to Lake Elsinore (or vice versa, depending upon one's view of the world). It's narrow and twisty with no stop signs for about 25 miles, which makes it a favorite of motorcyclists and sports car drivers, who often take it at illegal speeds. I was one of them back in the late '70s and early '80s.

While it might be fun for the racer boys (when they're not crashing) it's not a great road for wallowing, top-heavy vans. But if you want to get to the Anza-Borrego Desert from southern Orange County, it's the shortest way.

Luckily, I didn't have to deal with speeding testosterone today. There were a lot of ordinary drivers going ordinary speeds. I fell in at the end of the line and relaxed.

I passed several places where this winter's heavy storms had caused slides onto the road. Maybe that was one reason my fellow drivers were mellow. One does not want to zoom around a blind curve and discover a fresh slide. 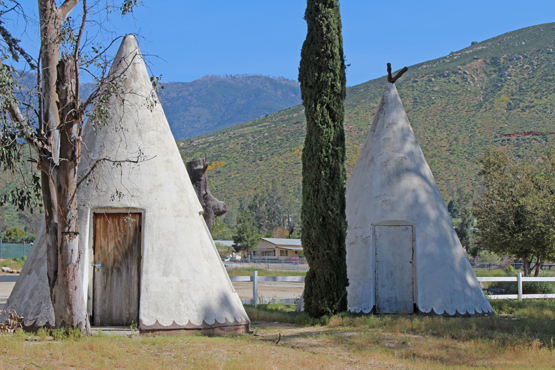 Whenever one is in the mountains of San Diego County, it's a nearly compulsory tradition to get apple pie in Julian. 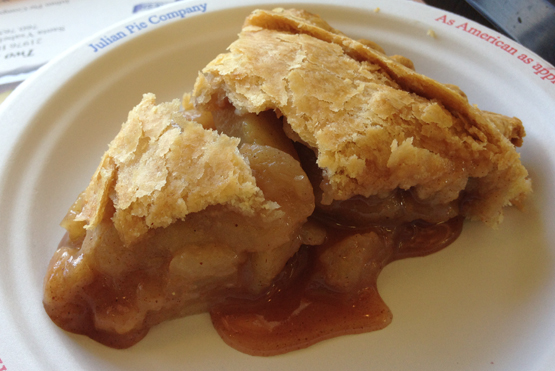 Pie opinions vary, sometimes heatedly. So someone will insist I went to the wrong pie shop. Nonetheless, mine was an excellent example of apple pie.

For me, the issue isn't one Julian pie versus another Julian pie. It's Julian pie versus Pie Town, New Mexico, pie. Because if you're going to name your town after pie, and put it out in the middle of nowhere, that had better be some damned fine pie to make the drive worth it. Places like the Julian Pie Company move a lot of pies through their two locations (though not nearly as many as, say, Marie Calendar's). Their pie making operation is almost like a factory. Their pies are consistent. Meanwhile, Pie Town is a much smaller market. They can't sell hundreds of pies just during lunch. So their pies have a distinctly hand made quality. Does that make them better? Mmmmmm, usually. Sometimes the bottom crust might be undercooked, though. Or the filling might be kind of runny. Or there might be less fruit than you expect. But the same could be said of any grandmother's pie. My mother made fabulous pies. Most of the time.

After pie, I continued on to Anza-Borrego Desert State Park. Super bloom time! Except it dawned on me shortly after arriving. Blooming means pollen. Super blooming means super pollen. And angry sinuses. It's also crowded, with more weekenders on the way. So I'm going to leave in the morning. Maybe I'll have more pie.