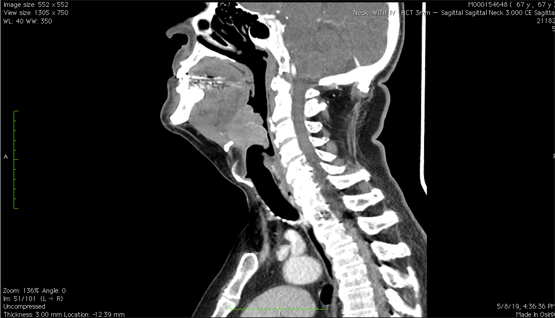 An exclusive look at the inner Al

If you’ve been following this blog the past couple of months you know about my quest to find out what’s wrong in my throat. There were times I thought the medications were working, but the improvements were minor and brief. So yesterday they sent me to have a CAT scan. The findings:


There is a large, slightly enhancing soft tissue mass identified superior to the larynx, in the vallecula region. The mass is inseparable from the epiglottis. The mass measures 4.7 x 4.1 x 3.9 cm in size and has a slightly lobated contour. It is noted to produce significant narrowing of the airway in this region. The larynx itself is not involved. Note is made of a minimal amount of adenopathy in the upper neck bilaterally adjacent to the neuromuscular bundle. This is consistent with a neoplastic process with associated metastatic lymphadenopathy.

The parotid, submandibular, and thyroid glands are normal in appearance.


Vallecula: a depression just behind the root of the tongue between the folds in the throat. These depressions serve as "spit traps"; saliva is temporarily held in the valleculae to prevent initiation of the swallowing reflex.

Epiglottis: a flap in the throat that keeps food from entering the windpipe and the lungs

Adenopathy: a disease of the lymph nodes, in which they are abnormal in size or consistency

So Friday Lou is driving me to Tucson to see an ear-nose-throat specialist. There might be some endoscopy and a biopsy. And I might end up in the hospital for surgery. That means I’ll probably not be posting for a few days.

Now to make this relevant to the nomadic life. I’m lucky in two ways. One is that I have Medicare, so I can afford treatment. The second is that I have someone I can depend upon for whatever help I need. A round of applause for Lou.