I have an appointment Friday afternoon at UCLA Health for a followup PET scan. Rather than drive from the eastern edge of California to the western edge all in one day (which I have done several times before), I decided to break it up into shorter hops.

So I left my campsite along Ogilby Road this morning, drove over the dunes at Glamis, got a shower at the Flying J in Brawley, took Highway 111 along the Salton Sea, turned up Box Canyon at Mecca, and now I’m camped at the south entrance of Joshua Tree National Park. I’ll spend Wednesday in the park then Thursday, sometime between morning and evening commute traffic, I’ll make the slog to LA. 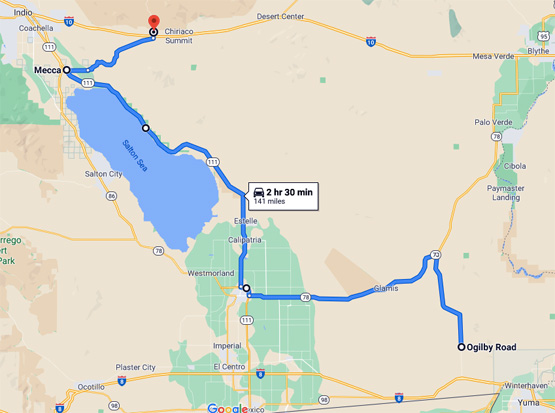 It’s not the straightest route, but it's where the paved roads go, And it’s more scenic and relaxed than I-10 from Blythe.
I got a hotel room within walking distance of the medical center. The tricky part was finding one that didn’t have low-clearance underground parking. The Rolling Steel Tent needs its headroom. Don’t wanna go scraping the solar panel off the roof.