Hi from the sky 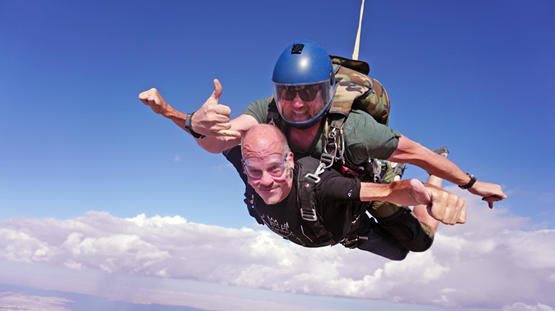 Skydiving has been on my list ever since I learned there was such a thing. Tandem skydiving put it within reach. And surviving cancer made it a priority. Time to celebrate! Time to thumb my nose at death.

The video I had to watch beforehand, and the liability waiver I had to sign in multiple places, made it clear there was a possibility of disaster. But I figured the guy I was strapped to wanted to survive unhurt just as much as I did.

I was calm as the plane climbed, as my partner gave final instructions. I was going to step out into thin air. I was going to fall at 138 miles per hour. Cool. And if I were to hit the ground at that speed? Shrug. I’ve had a good life.

Flying/falling above Arches and Canyonlands national parks provides great views of some amazing scenery. Much better than some pasture somewhere.

The door opened, I got in position and… Wow! Much more violent than anticipated. But unlike the short mayhem of bungee jumping (which I did back in 1995) there was time to adjust to the sensations and be in the moment. Very cool. Too bad the freefall wasn’t a little longer. That’s a metaphor for life. It can be more violent than expected, but adjust to it, be in the moment, and in the end, wish it was longer.